A Tribute: Dancing with the President 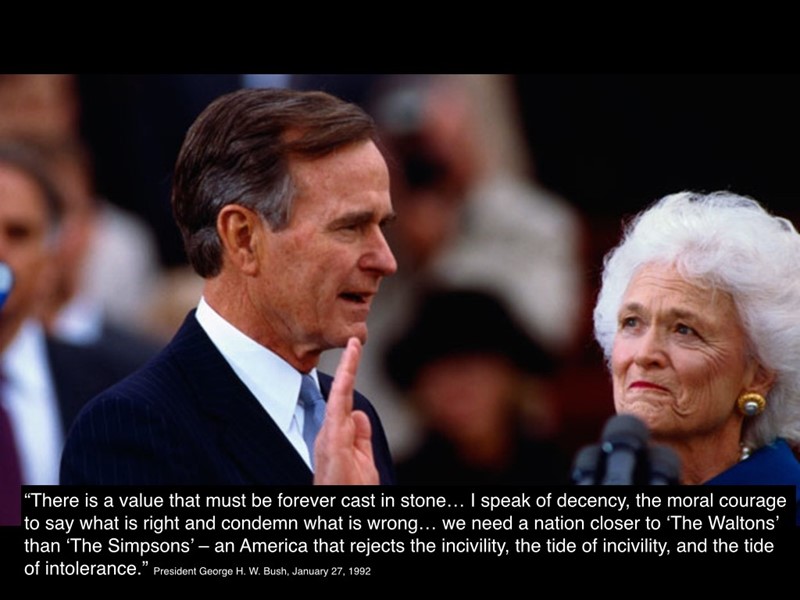 To the volume of wonderful comments on President George H. W. Bush, I wish to add my very small two cents.

Indeed he was a noble man. When people have asked me over the years of my assessment of him, I have always responded with “He was a real gentleman, in every sense of the word.”

There is a reason why so many people, during these days of memorializing President Bush, have commented over and over again upon his character. Yes, they have rightly, now, pointed to his extraordinary ability of forging relationships with foreign dignitaries, his handling of the fall of the Soviet Union and the end of the Cold War, his command during Desert Shield and Desert Storm, and a number of other noteworthy achievements that unfortunately during his lifetime didn’t get press in a blue journalistic world. There is a long list of commendable performances, I believe, as President. But the most frequent and compelling comments are with regard to his character and how he treated other people.

I offer my own small example.

Early on in my time at the White House, I was rushing somewhere in the West Wing when I rounded a corner, only to nearly bump into President Bush headed in the opposite direction. The hallway was not very wide there and so I immediately jumped to my left, mumbling a humble “excuse me, Mr. President”. But he had, at the same time, moved to the same side. I immediately mumbled another, more humble, “I’m sorry” and jumped to my right… just as he had moved back too. I was obviously embarrassed by all of this and was about to offer another deep apology for delaying him from no doubt some important task, when he just smiled, put his hands on his hips and did a short little jig to the right and then to the left. I don’t know why, but I quickly did the same and for two steps I danced with the President. We laughed and he went on his way and I mine.

I think of that interaction with him often over these past days, because it speaks of his humble and kind character. He could have just ignored me or he could have even been miffed at my being in his way. But instead, I believe he recognized my discomfort and sought to put me at ease. He paused in his busy day to have a brief moment of light heartedness with a lowly staff member who needed it.

Barbara was similar. I recall a Christmas event in the East Dining room. The party was in full swing awaiting the arrival of President and Mrs. Bush. A young marine was jiving to the live music in front of the band and was totally unaware that they had silently entered the room. While everyone parted to let them through, he continued to jive away. Barbara slipped up behind him and put her arms around him. When he turned around and saw her, I thought he was going to have a heart attack. She and the President just laughed and she gave him another big hug and continued on their way to greet other guests.

She and the President were two peas in a pod.

I suppose the other thing that will forever stick in my mind is what he said in his “farewell address”. He spoke of a value that must be forever cast in stone: decency and the moral courage to say what is right and condemn what is wrong. This requires even a greater measure of courage today than when he spoke it 26 years ago, for doing so will reap one a firestorm of hatred and scorn.

This is a walk for only the brave and the faithful.

Yet many, many have walked that difficult path in the past… some to their graves. Our call is to nothing less.

He also spoke against what he saw back then as the rising “tide of incivility”, a tide he believed America must strongly reject. He longed for a nation that was closer to “the Waltons” rather than “the Simpson’s”.

President Bush always believed that he had a responsibility to give back to this nation and to its people. This belief caused him to see others through the eyes of humility and kindness and an obligation to do what he could for the betterment of others.

He did that for me in an obscure little hallway in the White House.

We have lost a good man.