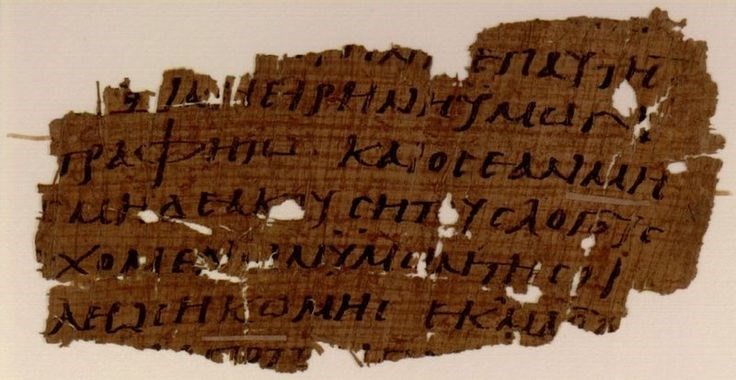 This headline caught my eye. And in the opening paragraph were the shocking statements: “..there are currently 5,800 ancient Greek manuscripts or fragments…almost none of them completely agree with the others…” And then the bold statement that errors found in the manuscripts indicate “deliberate, later insertions that could substantially affect Christian doctrine and understanding.”

Wow…I thought. They must have found errors that are going to show Christianity to be false or at least on shaky ground! Now, I only thought that in my typical sarcasm, because we’ve seen these headlines before. The headlines are meant for those who read them and form an opinion whether or not they continue to read the article. In some cases, even after reading the article, that may or may not support the headline, they still retain the initial impression that the headline gave them.

So, what do we find in here that “could substantially affect” Christianity?

Well, first of all, a confession that 99% of the differences are attributed to spelling, transposing words or careless copy errors. This is an honest admission and is quite true. But it its important to note that the reason we know this is because Christians hold the Word of God so highly, that we have, for thousands of years, been scouring over the manuscripts and fragments, categorizing anything that would help us understand what the original documents actually said. The truth is that this scholarly effort, done by Christians themselves, has no peer anywhere. It is the drive to know the original words that compels us to do this kind of excruciating, detailed analysis of every fragment we find. When one fragment has two words transposed compared to thousands that don’t, it is easy to recognize a copy error. This is why we can have such a high degree of confidence that we know what was in those originals. Yes, there are a handful of variants that are “substantial” but none of them “substantially affect” our Christian doctrine.

Well, one is the supposition that Jesus may have not said to baptize in the name of the Father, the Son and the Holy Spirit. And what is the evidence given in the article? Is it left out of many manuscripts? No. The argument is made because Peter, in Acts 2:38, when he is speaking of baptism, only mentions the name of Jesus. There is absolutely no evidence to say that the words of Jesus in Matthew 28:19 were altered. And, the author admits it.

Another is whether or not Peter and Paul had a “harmonious” relationship as might be indicated in Gal 2:7-8. The negative evidence is taken, unbelievably, from Marcion of Sinope, a reviled heretic in the second century who didn’t think highly of Peter. This is pretty lame evidence. The only textual evidence is that Paul switches from using “Cephas” to “Peter” in these verses. Even if they were found to have been added later and not in the original, it is hardly going to turn Christianity upside down.

Another of these earth-shaking issues has to do with Paul’s extensive greeting at the beginning of Romans versus his usual simple greeting. This will surely keep me up at night. Again, no textual evidence that Paul didn’t wax long for the Romans and not for others, just as you might not always begin your letters the same way.

Only three of the ten passages in the article fall into the category of possibly not being in the originals. All three have been acknowledged in our modern translations and none of the three have any impact on Christian doctrine at all.

The first is the question regarding the ending in Mark 16:9-20. These passages don’t appear in many of the early manuscripts and almost all translations will have them bracketed with a footnote that they should be read with caution, as they may not have been a part of Mark’s original. Nothing doctrinally is lost if these verses are removed.

The second is the section in John’s Gospel, 7:53-8:11. Again, it is not found in any of the oldest manuscripts.  It is the story of the women caught in adultery. Again, there is nothing that would change in Christian doctrine without this passage.

The third is from 1 John 5:7-8. Here are the two passages as they are disputed:

ESV (similar in NAS, NIV): For there are three that testify: the Spirit and the water and the blood; and these three agree.

The NKJ has a footnote that the larger portion ending with “the Father, the Word, and the Holy Spirit” is only found in the later manuscripts. Again, nothing has changed in Christian doctrine now that the NAS, ESV and NIV are in use without this verse...and have been for many years.

Are there portions of the Scripture where we still have questions about what was in the original? Yes. But they are few in number and none of them change the fundamental teaching of Christianity. My college students have given me example after example of how professors, and other students, will raise the flag that “the Bible is unreliable, filled with errors.” You will hear it and see it, just like in this headline.

But, you can confidently say to them, “Yes, there are a number of spelling and copy errors. And we have categorized every one of those. But we have so many manuscripts that we have been able to discern those spelling errors and the others and none of them changes one iota the fundamental teaching of Christianity. Thank you for pointing out the deep scholarly work that Christians have done for thousands of years to insure that we have gotten as close as possible to the original texts. And do you know why we do all of this detailed, excruciating work? Because we are convinced that God has spoken to us in written form. And we will do everything possible to capture it rightly and to then preserve it. Thanks for bringing this up!”