If Jesus Rose from the Dead, then (#2) the Stone Was Rolled Away 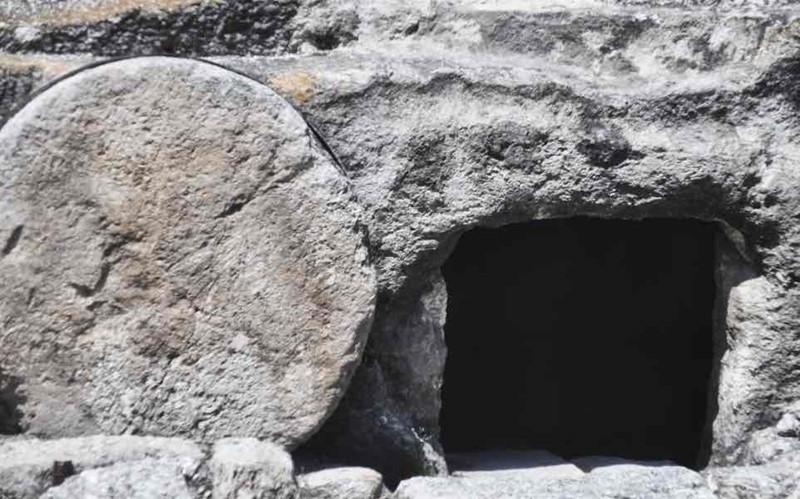 Here is the historical record:

Now after the Sabbath, toward the dawn of the first day of the week, Mary Magdalene and the other Mary went to see the tomb. And behold, there was a great earthquake, for an angel of the Lord descended from heaven and came and rolled back the stone and sat on it. His appearance was like lightning, and his clothing white as snow. And for fear of him the guards trembled and became like dead men. But the angel said to the women, “Do not be afraid, for I know that you seek Jesus who was crucified. He is not here, for he has risen, as he said. Come, see the place where he lay. Matthew 28:1-6

“Wait a second, it doesn’t logically flow that ‘if Jesus rose from the dead, then the stone was rolled away.’ If Jesus was in His resurrected body, then, as we see later with the disciples, He passed through walls. He could have passed through the stone or the walls of the tomb. He didn’t need the angel to roll the stone away so He could get out.”

This is actually correct in asserting that Jesus could have left the tomb by passing through the rock. In fact, it appears as if He did! Look at the account again. The angel rolled back the stone, sat on it, and told the women that Jesus was not there for He had risen. In the flow of these events, it seems most likely that Jesus had already left the tomb when the stone was rolled away. It would be a stretch to think that the women approached the tomb, the earthquake shook the ground, an angel descended, rolled away the tomb, so that Jesus, who was waiting inside, could then steal away quickly without the women seeing Him, and then the angel tells the women that Jesus was not there and had risen. The text would lead us to believe that Jesus had already risen and departed the tomb.

And, though some correctly say that the text in John does not say that Jesus passed through the walls, and argue against it, the passage leads us to think He did, in some form or other:

Eight days later, his disciples were inside again, and Thomas was with them. Although the doors were locked, Jesus came and stood among them and said, “Peace be with you.” John 20:26

Okay, so why, then, was the stone rolled away if it wasn’t to allow Jesus to escape?

First of all, and most plainly, the text tells us that it was so the women could “Come, see the place where He lay.” This would be impossible if the stone were still sealed against the tomb. But the seal was broken and the stone was rolled away so that they could see for themselves. And it wasn’t just for the women, it was also for the disciples to see, and believe.

This leads us to the second, and most important reason, and that is that it is consistent with God's nature to do things this way. Our Christian faith is not based upon myth or legend or “spiritually discerned” truth claims about ethereal things. Our faith has, from the beginning and to the end, been based upon reality born out in the “warp and woof” of time, as Francis Schafer was want to say. It is somehow in the nature of God that He chooses to affirm to us who He is and that His truth claims are real by showing us in the tangible elements of reality. The plagues of Egypt were real. The pillar of fire was real. The tables of stone were real. Fire actually came down out of heaven on Mt. Carmel. Jesus was born a real baby. He healed real people. He touched real lepers. He was scourged and He was crucified and His physical body was wrapped and laid in a real tomb. And, now, He had risen from the dead and the tomb was empty. The stone is now rolled away so that they could  “Come, see the place where He lay” with their own eyes.

Don’t let anyone tell you that your faith in Christ is a leap in the dark or some metaphysical belief not rooted in reality. God has, from the beginning, married His truth claims with real reality… over and over again.

And lastly, the tomb was empty as a testimony to those who do not believe. Though the Scripture does not detail this, you can be sure that the chief priests and the Pharisees came to inspect the tomb. And the tomb sat there empty for whomever wished to come and lay eyes upon its reality.

As we will deal with later, the empty tomb remains the key frustrating evidence for those who desire to refute the resurrection of Christ. Sir Norman Anderson, considered one of the foremost legal minds ever, after a lifetime of legally analyzing the evidence, concluded:

“The empty tomb, then, forms a veritable rock on which all rationalistic theories of the resurrection dash themselves in vain.”

A veritable rock which would not exist unless the stone had been rolled away.