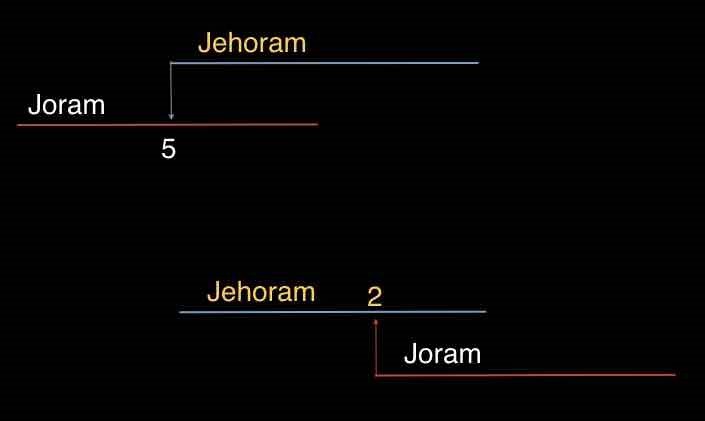 Several years ago, I was teaching an adult Sunday School class on the life of Elijah and Elisha.  I could not stand to have my students going through that study without an overarching comprehension of how Elijah and Elisha fit into the whole scheme of the larger picture: who they were speaking to; who the kings were; where they fell in the line of the other prophets; and the dates, etc. I couldn’t find one that was already available, at least not one that was detailed enough and satisfactory for my purpose, so, I thought I would just make up my own. Then I got carried away. I started out wanting to chart the kings of Israel, but then felt I must include the kings of Judah as well. Then I expanded it to begin with the divided kingdom and, well, that just begged for me to include the period of the Judges and, well, as long as I was doing it, why not begin with creation? Yes, I got carried away.

But, it was a delightful task and one that I thought would be very beneficial to my students. In addition, I figured that this would be a simple mathematical exercise.  The date when the kingdom divided was well known as well as when Babylon captured Judah and Assyria captured Israel. So, I had the bookends. The Scripture is full of the mathematical details that I needed. This king began in the nth year of this king’s reign and he reigned for x years until he died. All I had to do was to list the kings, when they started, and how long they reigned and I would have my awesome reference chart for the students. I was sure, because of my view that the Scriptures were inerrant, that everything would work out perfectly. And, God appeared to have given us everything we needed to make the chart.

In the thirty-eighth year of Asa king of Judah, Ahab son of Omri became king of Israel, and he reigned in Samaria over Israel twenty-two years.

That is pretty clear. I know now when Ahab began his reign and I know how long he reigned and I know when his reign began in relationship to the southern kingdom, specifically in the 38th year of Asa, king of Judah.

Joram, son of Ahab, became King of Israel in Samaria in the 18th year of Jehoshaphat, King of Judah and he reigned 12 years.

All very clear, right? So, I was drawing my lines and putting the kings in their proper order and calculating the dates from Solomon all the way down, first the line of Israel and then the line of Judah. And I was humming along until I got to the end of each line, when they went into captivity. Then I had a little problem. Actually, a big problem. The ending dates that I had calculated weren’t anywhere close to the dates when Babylon or Assyria took them into captivity. I went back and recalculated everything and rejoiced when I found a couple of errors in my math. But those only made the difference worse. But that was only the beginning of my crisis.

Now, this was fairly early in my faith and it really threw me. I was convinced of the inerrancy of Scripture, but it had never before been tested like this.

Here is an example of what I was facing. Look at these two verses:

II Kings 1:17 So he [Ahaziah] died, according to the word of the LORD that Elijah had spoken. Because Ahaziah had no son, Joram succeeded him as king in the second year of Jehoram son of Jehoshaphat king of Judah.

Houston, we have a problem. A BIG problem. There is no trick here. These are the actual verses. Some translations use the name Jehoram for Joram because there is a possibility that they are equivalent in Hebrew, but that only makes it more confusing. They are two different kings, one is the son of Ahab who came to reign in Israel and one is the son of Jehoshaphat who came to reign in Judah.

What do you believe about the inerrancy of Scripture. If you believe it is NOT inerrant, then you might shake your head and say, “See, the Bible gets a lot of things wrong.” Or “Well, the Bible is true in areas of faith, but these dates and things like that don’t matter.”

This verse and the issue of Joram and Jehoram have been used for years by liberal theologians and scoffers to charge that we are wrong about the inerrancy of the Bible—that only the ignorant and unschooled still believe in inerrancy and true scholars have long abandoned that archaic position.

I was sick.  Here I was, just trying to be a good, faithful teacher, building a really neat chart and then Joram and Jehoram came into my life. And I began to suffer deeply. Doubts began to rise. I began to read the liberal position on this and it was tough to refute. I was looking at a contradiction that was clearly yelling “Error! Error!” in my “inerrant” Bible.

Then, I read a most incredible book.  A book by Dr. Edwin Thiele entitled, The Mysterious Numbers of the Hebrew Kings (1983).  Dr. Thiele believed in the inerrant word of God. And he believed it with unwavering faith. He was sure there must be an explanation for all of this and the other controversies surrounding the dates of the kings.

He dedicated his life to understanding, not only this one, but several other problems like this.  By the way, in another verse, II Kings 3:1:

3:1 Joram son of Ahab became king of Israel in Samaria in the eighteenth year of Jehoshaphat king of Judah, and he reigned twelve years.

To you and I, that may appear to make matters worse. Now we have a third contradiction. Joram beginning his reign during Jehoshaphat’s reign, not Jehoram. It reality, this verse actually helps.

After the kingdoms divided, Judah retained the traditional ‘accession’ year approach. So, when Rehoboam began his reign in 931 B.C., because it was after the start of the month of Tishri, following the accession year approach, Rehoboam was not in his first year, he was in his accession year.  When he passed Tishri, he would then be in his first year.  Israel used the world’s approach, so when Jeroboam began to reign, he was immediately in his first year.  When he crossed Nisan, he was then considered in his second year.  So, if you look at this point in time, Jeroboam, who actually started to reign after Rehoboam would be considered to be in his third year when Rehoboam was still in his first year.  Now that does not account for the problem in our verses yet, but it begins to clue you in that there is something going on due to the different ways each kingdom calculated the dates of their kings.

Well, that is part of the answer, but let me give you the big one.  It was a common practice, in that part of the world, for a reigning king to appoint his son as king and co-regent with him. This would usually occur if there was some threatening event that increased the possibility that the king might soon die.

Let’s begin with the fathers of Joram and Jehoram: Ahab and Jehoshaphat. In 1 Kings chapter 22, we are told that both of these kings joined up in a major battle against the Syrians. It was in this battle that Ahab died. This was also the battle where Ahab came to Jehoshaphat and said, “Hey, I’ve got a great idea. How about if you go into battle wearing your royal robes so the Syrians can spot you and I’ll go in disguised as a common warrior.” (deep paraphrase!) Somehow Jehoshaphat thought this was okay. Anyway, the Scripture says that a man drew a bow at random and the arrow struck Ahab in exactly the wrong place, right in the joints between his armor plates. So, Ahab died. 1 Kings 22: 51 then tells us that Ahaziah then became king and reigned two years. When he died, 1 Kings 1:17 says that Joram became king in the 2nd year of Jehoram.

Now, where did Jehoram come from? Isn’t Jehoshaphat still reigning? Yes. But, what occurred two years ago that now has Jehoram in his second year? The big battle in which both Jehoshaphat and Ahab had joined together against the Syrians! Obviously, Jehoshaphat had appointed his son, Jehoram, as a co-regent with him before that battle and Jehoram was now in his second year. Fast forward, and now you have Jehoram beginning his sole reign.

What does the Scripture say? Jehoram, son of Jehoshaphat, began his reign in the 5th year of Joram, son of Ahab…and hallelujah! Here is exactly what the Scripture told us. You can trust God’s Holy and inerrant Word.

I danced for weeks!

And, I thanked God over and over again for a man named Dr. Edwin Thiele who believed in the inerrancy of God’s word and didn’t give up until he found the missing puzzle pieces that put it all together.