The Wisdom of Walter Williams Is Not Gone 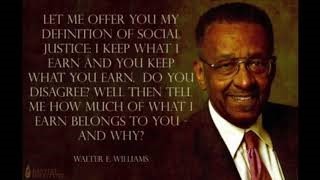 The world lost a great man in Walter Williams last week. We lost a great mind, a practical thinker, a wonderful economics teacher. Showing his students not only the truth, but how you get to that truth seemed to be his consistent objective and pattern. His column was always a must read for me and I learned much from him over the years.

It was through him that I first learned of the folly of minimum wage laws and corporate and inheritance taxes. It was through him I understood the reality of the Scripture's teaching regarding slothfulness and poverty and to not be taken in by liberal emotional pleas that fool the ignorant and destroy lives once they are implemented.

I am quite sure that Williams took his lead from Jesus in that he always provided a practical example in his teaching. Jesus pointed to things like the lilies of the field and lost sheep; Williams pointed to the farmer, the truck driver, the doughnut baker.

He evidently had written a column before he died on weighing the costs against the benefits and it was published today. In it was the typical Williams way of making things simple. His analysis of the current COVID policies and actions were put in the practical example of the cost/benefit policies we make regarding driving. Over 36,000 people die every year on the highways, all of which could be saved if we simply mandated a 5mph speed limit. Yet we choose to have higher speed limits, even though it will cost many lives, because of the heavier costs of not doing so: i.e. it would be impossible to truck foods and goods at a low speed or commute to work from any distance. However, we haven’t made those practical policy decisions when it comes to COVID, choosing to destroy businesses and close schools and restaurants without a true cost/benefit rational. He points to the 60,000 scientists and physicians who have signed the Great Barrington Declaration opposing a lockdown because they believe it will impose much more harm than good. Instead, the media provokes us to live in fear and the state grows more ubiquitous in its power and control.

Williams consistently called us away from the liberal feigned emotional policies that only empowered the state at the real cost to the citizenry. It was for this reason he was not often found on the pages of blue media.

Williams wrote and spoke often of the consequences of bad policy and its effects on the black community. He taught me to understand that the plight of the black family today can be directly traced to destructive welfare policies and the feigned war on poverty and even the origins of Planned Parenthood. You might want to read his book "The State Against Blacks". In another book, "Suffer No Fools", he said this:

But the Lord has now taken him home and God always takes for a wise reason. When He prunes us, He is looking for more abundant fruit; when He prunes the Body of Christ, He is looking for a crop to replace what He removed. The wisdom with which Walter Williams wrote and taught is not lost because he is gone. It is still found clearly in the truth of God and the biblical worldview He has given to us.

Williams pointed us to that truth over and over again.

I will miss him greatly, but I look forward to the many who will arise in his place.