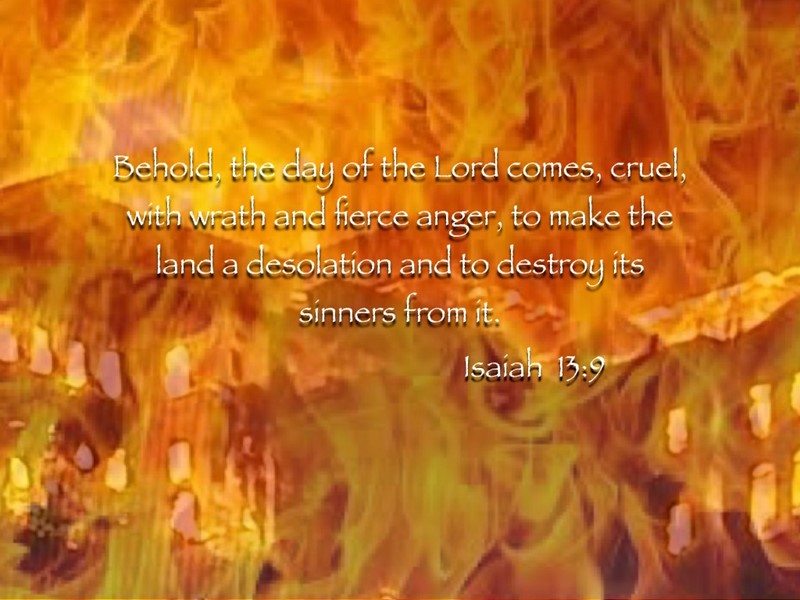 I suppose this attribute of God is one of the most rejected in our culture, for a people who have self-ascended into their own divinity surely deem themselves immune from judgment. Spurning the notion of transcendent truth, we now get to make up our own. “My Heart” becomes a divine voice and everyone should be obligated to acknowledge it as holy and unassailable. If I want to define my own sexuality, then the world should bow down and pay homage. The individual’s heart is revered as sacrosanct. This is why we have become a culture filled with little angry gods who are incensed with those who fail to pay them tribute.

But, alas, there is reality.

This is the reality that Paul writes about where the divine nature of God is evident to all men because of what God has made, yet man stand’s in defiance before Him and He therefore judges them[i]. Peter writes of scoffers who deliberately overlook the fact that God judged the world with a flood in the past and choose, therefore, to ignore that He will judge the world with fire in the future[ii].

The reality is that God and His transcendent Truth not only really do exist, but that He also judges the evil works of men:

“God’s judgment is against people who do evil acts.” Revelation 2:23

This is quite unnerving to us today.

This was a reality for Adam and Eve and all creation[iii]; it was a reality for those in Noah’s day[iv]; it was a reality for Pharoah and Egypt[v] and for Sodom and Gomorrah[vi]. Time does not allow us to speak of Ananias and Sapphira[vii] or Babel[viii] or Israel (judged over and over again) or Uzziah[ix] or Jezebel[x] or the 185,000 Assyrians that God put to death[xi] or when God opened up the earth and it swallowed the entire tribes of Korah, Dathan and Abiram and their households, their tents and every living thing that followed them[xii].

It is, indeed, “a fearful thing to fall into the hands of the living God.” Hebrews 10:31

These are things our culture doesn’t want to hear. And, if we were honest, we don’t either. It is possible that you really don’t like the picture and verse I posted at the beginning:

Behold, the day of the Lord comes, cruel, with wrath and fierce anger, to make the land a desolation and to destroy its sinners from it. Isaiah 13:9

It just seems so... well, so judgmental! We would rather hear of a God of Hollywood love… a God of the wink and nod, “tsk tsk” and “boys will be boys” and “aren’t they just so adorable”. That’s the God we want… the God of pleasant things.

Yet, God is both Creator and Holy, and He therefore has the right to judge rebellious acts by His creatures that are contrary to His Holy character and plans. But here we must be careful, for it is more than that He has the “right” to do it. He doesn’t judge simply because He has a right to, as if His judgment is merely an emotional reaction to being offended… a God pounding someone in order to assert His rights. He righteously judges because this is who He is. He doesn’t “judge” simply because He gets angry with someone. He judges because He is the Judge. This is sometimes hard for us to contemplate for we are so finite and depraved in our nature that we can only see judgment as a violent emotional outbreak rather than a holy, righteous attribute of God. When you step into a courtroom and the bailiff orders “All rise!” it is not because an emotional outbreak is about to enter the courtroom. The one who steps to the bench, wearing the judicial robes is a “judge”. So, too, is God. He is the Judge who judges rightly in accordance with what is righteous and holy. I sometimes wonder if the anthropomorphic language of God adorned in His robe is just as much the robe of a Judge as it is the robe of a King.

The Judge of the universe will uphold righteousness and holiness. It may not be immediate and it may not be according to how you want it to be meted out. For our own rebellion, we would like for it to be overlooked; for our enemies, we want it swift and thorough. But, in the end, always according to His good plans and purposes, God will judge. His delay is often seen by the foolish as getting a pass or sometimes leads them to scoff “where is this God?” Sometimes we do the same, complaining when wrongdoers prosper or evil seems to reign.

Of course, we are more than happy when God delays His judgment on us. This is the God we like.

When my oldest daughter was a little girl, just learning to read, she was looking over my shoulder as I was studying J. I. Packer’s “Knowing God”. She looked at the title of the chapter I was reading and sounded out “God the Fudge”. It was written in a script and she mistook the “J” for an “F”. I thought it was funny and when I explained it to her we both laughed. But I’ve never forgotten that because it is in our nature to want to carve out the hard things in God and make them into soft things… sweet things that are more delightful to our own desires.

But, the Judge has already meted out the most horrible of judgments, though there is yet a horrible one to come. This was the judgment rendered upon a totally innocent Man… a Man who lived a sinless life… a Man who obeyed God perfectly, even an obedience that took Him to the scourge and the cross. Jesus bore the entirety of God’s judgment and wrath for His people. All of it. God said that He would not let the guilty go unpunished. And if there had not been a substitute for us, this promise would have doomed us for all eternity. But God was pleased, for the sake of His elect, to place all of our rebellion on Him.

“Surely he has borne our griefs and carried our sorrows;
yet we esteemed him stricken, smitten by God, and afflicted.
But he was pierced for our transgressions; he was crushed for our iniquities;
upon him was the chastisement that brought us peace, and with his wounds we are healed.
All we like sheep have gone astray; we have turned—every one—to his own way; and the Lord has laid on him the iniquity of us all.” Isaiah 53

It was the Judge who smote Him. It was the Judge who pierced Him and crushed Him. For this we cringe at the massive weight He bore; yet for this we also rejoice and clap our hands in gladness for the judgment due us is no longer. The Judge didn’t lay aside our crimes; He just laid them on Someone else.

Oh what a glorious mystery, this Good News! Let us ponder this week the goodness and the severity of God.

P.S. I suppose I ought to here do the most unpopular thing and comment on the “Only God can judge me” mantra of our culture. You see it tattooed on a lot of body parts and you see it on posters and in songs and, well, everywhere. Although it has its genesis in a rap by Tupac Shakur in 1996, it is used today as a shut-down phrase for anyone or anything that attempts to tell me I can’t do what I want to do. It certainly isn’t an endorsement for God as Judge. But, as we all tend to use biblical sayings for our own purposes, so, too, does this phrase attempt to silence all who would disagree with the right to follow the longings of my own heart. Don’t be fooled by it.

God’s judgment is against people who do evil acts. Revelation 2:23

The Father judges no one, but has entrusted all judgment to the Son. John 5:22

God is a righteous judge, and a God who feels indignation every day. Psalm 7:11

The heavens declare his righteousness, for God himself is judge! Selah Psalm 50:6

Do you indeed decree what is right, you gods? Do you judge the children of man uprightly? No, in your hearts you devise wrongs; your hands deal out violence on earth. Psalm 58:1-2

Behold, the day of the Lord comes, cruel, with wrath and fierce anger, to make the land a desolation and to destroy its sinners from it. Isaiah 13:9

The king mourns, the prince is wrapped in despair, and the hands of the people of the land are paralyzed by terror. According to their way I will do to them, and according to their judgments I will judge them, and they shall know that I am the Lord.” Ezekiel 7:27

“Therefore I will judge you, O house of Israel, every one according to his ways, declares the Lord God. Repent and turn from all your transgressions, lest iniquity be your ruin.” Ezekiel 18:30

Let the nations stir themselves up and come up to the Valley of Jehoshaphat; for there I will sit to judge all the surrounding nations. Joel 3:12

He shall judge between many peoples, and shall decide disputes for strong nations far away; and they shall beat their swords into plowshares, and their spears into pruning hooks; nation shall not lift up sword against nation, neither shall they learn war anymore; Micah 4:3

And he commanded us to preach to the people and to testify that he is the one appointed by God to be judge of the living and the dead. Acts 10:42

The times of ignorance God overlooked, but now he commands all people everywhere to repent, because he has fixed a day on which he will judge the world in righteousness by a man whom he has appointed; and of this he has given assurance to all by raising him from the dead.” Acts 17:30-31

“…on that day when, according to my gospel, God judges the secrets of men by Christ Jesus.” Romans 2:16

“I charge you in the presence of God and of Christ Jesus, who is to judge the living and the dead…” 2 Timothy 4:1

Do not grumble against one another, brothers, so that you may not be judged; behold, the Judge is standing at the door. James 5:9

Then I saw heaven opened, and behold, a white horse! The one sitting on it is called Faithful and True, and in righteousness he judges and makes war. Revelation 19:11