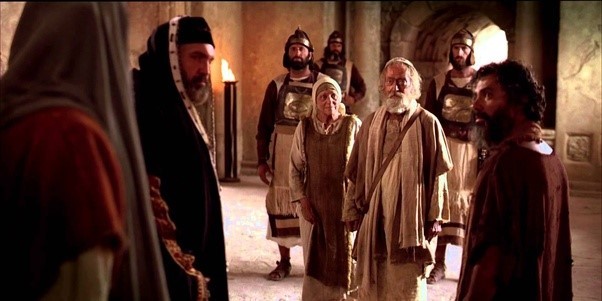 One of several events recorded in the Scriptures that I find somewhat humorous is the time when Jesus healed the beggar who had been blind from birth. He excitedly told people what had happened to him, but they were skeptical that he was really the blind beggar who could now see. So, you have this miraculously healed man essentially running around saying “It’s me! It’s really me!” The Pharisees then called him in and questioned him because they didn’t believe it either and soon became upset because, if the healing were true, it had occurred on the Sabbath, defying their “laws”. They eventually called in the man’s parents to ask them if this guy was really the old beggar, but the parents were afraid and were vague in their answers:

His parents said these things because they feared the Jews, for the Jews had already agreed that if anyone should confess Jesus to be Christ, he was to be put out of the synagogue. John 9:22

They called the former beggar back in again and became angry with him because of his testimony and then “put him out”. We don’t know for sure, but in the context, it seems implied that they banned him from the synagogue.

I thought of this a couple of weeks ago when I got the news that Twitter had banned Focus on the Family because they were, in the words of George Orwell’s 1984, guilty of ThoughtCrimes. Twitter called it “hateful” content. What hateful things did Focus write? Well, they were writing about Biden’s appointment of Dr. Rachel Levine to a DHHS position and noted “Dr. Levine is a transgender woman, that is, a man who believes he is a woman.”

This, apparently, is a Woke ThoughtCrime… “hateful”… and so Focus was banned.

Just a few days ago, I learned that YouTube had banned the Truth Project lessons on science because it violated their “child protection rules”. I racked my brain to figure out what in the world I said in those tours that could be considered child abuse. The only thing I can figure is that I challenged evolutionary theory and therefore was also guilty of a Woke ThoughtCrime.

Today we read that Facebook has banned all news feeds from Australia. Some newspapers “down under” are referring to the company now as “Faceblock”. That was on page B1. On page B3 was an article about China issuing new rules that require people to have “government-approved credentials” before they can post anything online that is political or deals with the military, health, economics, education or judicial matters. One of China’s more popular non-conforming columnist stated that those without government credentials were now basically relegated to topics of “entertainment, food and beverages”.

In the socialist, communist country of China, one might expect this. But here?

We are entering into a period of time, especially in western culture, when Wokism is rapidly becoming the foundation of a host of new “laws”. And if you break those laws, the Woke Pharisees will become mortified and cast you out of the synagogue of commerce and communication.

Does this sound familiar?

The Beast of Revelation 13 is said to have the power to keep people from buying or selling. This doesn’t mean that I am necessarily applying those passages to our day. I only mean to point out that God has warned us about world systems that can garner enough power to hinder commerce for those who don’t embrace it. For years, it was hard to understand how that could possibly happen, but it is certainly understandable today and we who are “unWoke” are certainly facing an increasing amount of censure and restriction.

However, dear Remnant, these are days for us to be strong in our faith, holding fast to the truth of God’s Word. Yes, it may cost us… and maybe even dearly. But we are called to shine not surrender, to be salt not sequestered. Engage your neighbor with true agape love, form real relationships, tear down walls, build up trust and pray for opportunities to speak truth into their lives.

It is possible that the days are growing closer when the Internet is going to be increasingly patrolled by Woke Pharisees who will throw you out unless you conform. Maybe this website will be banned. If the Internet is your life, your prime source of information, your main means of interaction, where will you be then? Unless, of course, you confine your presence to “entertainment, food and beverages”.

You and I are increasingly going to be challenged to either conform to the world’s worldview or to stand for what is true and good and beautiful.

…do not be conformed to this world, but be transformed by the renewing of your mind, so that you may prove what the will of God is, that which is good and acceptable and perfect. Romans 12:2

Take heart! "Do not fret because of evil doers!" (Psalm 37:1) The Lord is our strength.

This may be our finest hour!