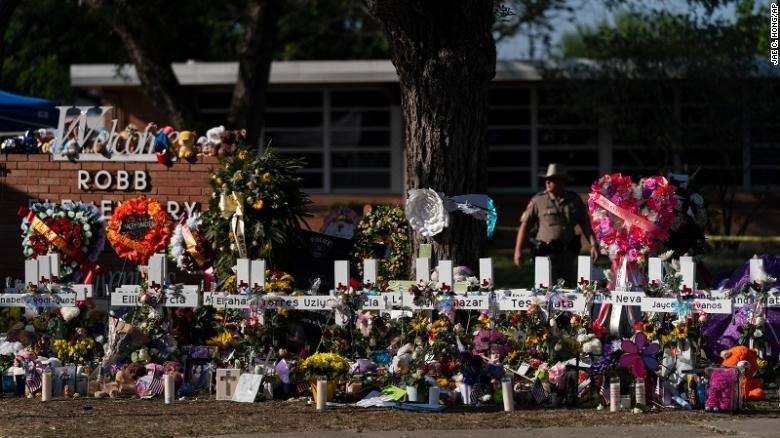 Another mass shooting. Little children dead. An eighteen-year-old, Salvador Ramos, killed them two days before they were to start their summer vacation.

And, once again, we get the same old rhetoric from all sides—all a thousand miles away from the problem and therefore the solution. We don't need blind rhetoric. We need divine wisdom and guidance. We need biblical prudence.

Instead, from one side we get calls for more gun laws; from the other, the 2nd Amendment.

I’ve read everything I can get my eyes upon in the last few days to assess where we are as a culture in response to such a tragedy… and not just this one, but many in our recent past.

I’ve read calls to repeal the 2nd Amendment. I’ve read a conspiracy theory that all of this is orchestrated by the Deep State. I’ve heard AOC say this is all the result of maleness. One journalist stated that when Ramos turned 18 as a male that was a red flag in itself. This, of course, is highly sexist, but our culture allows sexism in that direction, just as we allow racism in one direction. None of this empty rhetoric leads to solutions.

And, sadly but not surprisingly, many seemed to use the tragedy to make political hay.

In response to Uvalde, Canada is putting forward near draconian legislation that will end the sale, purchase, or even transfer of hand guns anywhere, anytime in Canada. Notwithstanding the reality that the Uvalde murders were committed with a rifle.

When Biden showed up in Uvalde, some people were shouting at him “Do something!” as if the solution is bound up somehow in the power of a Savior State.

One congressman accused Ramos of being transgender which opened up another whole can of shouting and accusations. Piers Morgan called the police “sniveling cowards”. Another used Uvalde to argue and plead for a total defunding of all police, everywhere.

The finger pointed in so many different directions it would be hard to count them: it’s guns; it’s male toxicity; it’s a conspiracy; it’s racism; it’s poverty; it’s an attack upon the Constitution; it’s mental illness; it’s the gun lobby; it’s white supremacy; it’s the police; it’s patriarchy... and on and on it goes.

The only one who came close was Cal Thomas, but he only hinted at it. In the last few words of today's article he said there was a moral issue involved as well. It was like a quiet whisper at the end.

We have fallen so far as a culture that we no longer dare to speak in terms of sin and morality. I'm not sure we even have the capacity to do so. We don't, or can't, see evil as evil, and call it as such. Evil doesn’t spring out of inanimate objects, evil is perpetrated by the fallen nature of man. It is the woeful state of the human heart and mind that moves one to despicable acts.

When Cain killed Abel, God wasn’t upset at the weapon, whether that was a rock or a club or Cain’s fists. It was the heart of Cain that God was pointing to when He warned him beforehand:

“So Cain was exceedingly angry and indignant, and he looked sad and depressed. And the Lord said to Cain, Why are you angry? And why do you look sad and depressed and dejected? If you do well, will you not be accepted? And if you do not do well, sin crouches at your door; its desire is for you, but you must master it.” Genesis 4:5b-7, AB

God judged Cain for his action because it was Cain who was responsible to “master”  his desires. This is, elsewhere in the Scripture, referred to as “self-control”, something we are generally and personally adverse to in our culture. We are bent more toward “self-aggrandizing” and "self-actualization".

Before the flood, it was the heart and mind that God was looking at:

“The Lord saw that the wickedness of man was great in the earth, and that every intention of the thoughts of his heart was only evil continually.” Genesis 6:5, ESV

Early on in our culture, it would have been held folly for someone to lay the blame of evil anywhere else than the human heart. We read it constantly from the founding generation. My favorites are from John Adams and Daniel Webster:

“We have no government armed in power capable of contending in human passions unbridled by morality and religion...Our Constitution was made only for a moral and religious people.  It is wholly inadequate to the government of any other.”

“To preserve the government we must also preserve morals.  Morality rests on religion; if you destroy the foundation, the superstructure must fall.  When the public mind becomes vitiated and corrupt, laws are a nullity and constitutions are waste paper.”

When human passions are no longer bridled (mastered/self-controlled) by transcendent values, when the public mind becomes vitiated and corrupt, neither the Constitution or laws will be of any value.

And this is the focal point of crime in our culture. Whether it is someone stealing your Amazon package off of your porch in broad daylight or cutting the catalytic converter off of your car; whether it is a mob cleaning out a store or random beatings of a stranger on the street; whether it is selling young girls for sex or killing people in alleys or bars or elementary schools…it is a heart and mind issue with respect to the transcendent understanding of good and evil.

And it is here that we find our nemesis, because we have stripped from the public square the allowance to speak of such things as sin or of transcendent morality or of corrupt and vitiated minds. We don’t even know what vitiated means anymore. Our prime ethic of Malevolent Compassion forbids one to call the thinking of the heart and mind of another “wrong”. (Unless, of course, that accusation flows in the right direction and only the right direction.) How dare anyone accuse another of “sin”?

And all of this, then, prevents us from looking also at those things in our culture that provoke evil thoughts. When James Holmes killed 12 people in an Aurora theater presenting “The Dark Knight Rises”, he was acting out the Joker. But the rhetoric after the massacre was all the same: guns and Constitution. No one wanted to ask if our movies were provoking evil in the viewers hearts and minds. No one asked questions about the blatant violence played out in video games or played as lyrics in our music or played out before our eyes in high definition color and surround sound in movies and videos that, post-Aurora, are still being produced continually without restraints.

No one asks the questions as to whether the value of human life in our culture, and therefore in our youth, is being horrifically devalued when we fight tooth and nail to retain the slaughter of millions of innocent babies in the womb. If you can kill your baby if you want to, then why can I not kill if I want to?

No one asks the question of the cost associated with teaching our children that they are nothing but accidental germs in a random, ethical free cosmos.

No one asks about the cost of removing transcendent moral values from the classroom.

No one wants to look at the clear evidence that a young man who grows up in a single-female-parent home has a much higher likelihood of getting involved in crime and drugs. Just to pose that question would raise a firestorm. It is verboten.

So, we will yell “gun control” and “Constitution” and no one will dare talk about the real cancer in our culture. Because all of this would inevitably lead us into a discussion about God and His transcendent ethics for man.

And we just don’t want that.

So, nothing will change.

I would be happy if someone would acknowledge the real problem and maybe say, “Until we can begin to change the broken family problem and the violent entertainment problem, etc., it would be wise to keep semi-automatic weapons of any kind out of the hands of anyone under 30.” I might vote for that if it were accompanied by an acceptance of the real problem.

But until then, all of our machinations are taking us in the wrong direction. Mexico has some of the most restrictive gun laws in the world and they also have one of the highest homicide rates. Trying to solve the problem by regulating inanimate objects or appealing to the Constitution isn’t going to get it done.

Dear Remnant, do not lose hope in these circumstances, for our hope does not rest in what happens around us, but what has happened for us 2000 years ago through Christ’s death and resurrection. Remain strong. Raise up Noble Males and Virtuous Females.

Join me, if you will, each Tuesday, noon Eastern, to pray that God will grant our culture repentance.