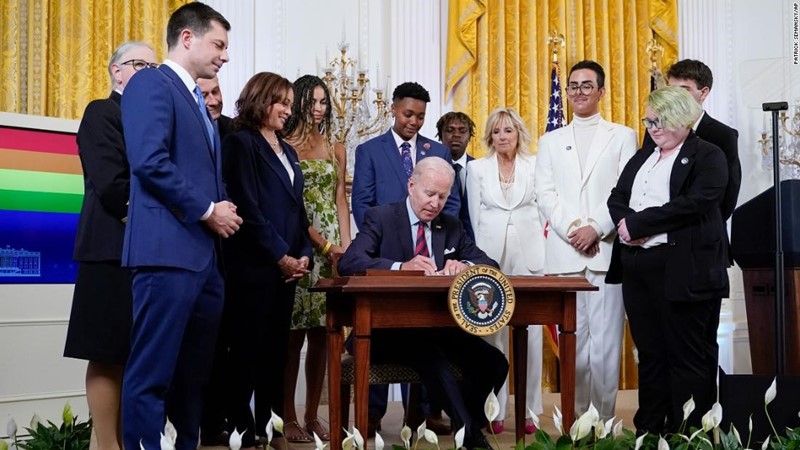 One could rightly describe a lot of what I and many Christians do as conversion therapy—helping people, believers and non-believers, to turn from a worldly worldview to a biblical one. The biblical worldview rests upon the truth about God and man, and in these foundational truths, man is broken—in heart, soul and mind. Our natural man seeks not the things of God, but his own perceived ends and pleasure, leading us often to be conformed to the pattern of this world (Rom 12:2).

Every time I read the Bible, it is a conversion therapy session for me.

The context of the Executive Order is to “protect the LGBTQI+ community”[2] and so one may argue that the order is narrowly focused and therefore I am going too far afield here in wondering if Christian evangelism or godly counsel or even the public reading of Scripture is going to be considered illegal in the U.S.

Consider this. The “Q” in LGBTQI+, stands for “queer” as it is even listed in the Executive Order’s title. But if you do a search for what this means, most of the websites that promote this will tell you that “Q” stands also for “questioning”. So, someone who is questioning their human sexuality, on any level or any degree, could be considered to be in the “Q” category and therefore fall under the Executive Order's reach.

Not long ago, I had the privilege to address the various faculty groups at a very well-known and top-notch Christian Academy. When I asked the elementary faculty what the number one issue with which their students were dealing, they all immediately responded with “gender confusion” or “gender identity”. At the time, this totally shocked me, for I was still caught up in the old think that elementary children were concerned with things that I and my friends were concerned with in elementary school: lunch money and recess and riding bikes and horses and learning grammar and math and dreaming of summer vacation last and summer vacation future.

But not so today. Our young children, who average 9 hours a day of “screen time” are bombarded with the entertainment industry’s wares and wiles. The result: they are concerned with gender identity. Am I a lesbian, homosexual, a trans boy or a trans girl or a bi or a Q? Am I “pansexual” as Miley Cyrus celebrates, and, oh how I do so much want to be like her? This then becomes pressed upon them as their most critcal struggle.

In the midst of this confusion, if parents attempt to put some wisdom into their child’s life, they could be guilty of “conversion therapy”. If one reads the Executive Order, this would be considered harmful and abuse. Children are taken from their parents for this sort of thing. A dad in Canada was jailed because he refused to use his daughter’s personal pronouns.

Dear Remnant! It is imperative for you to protect your children from the deceptive wares and wiles of the world. The smart phone you have placed in their hands is an open window and door to a world that is seeking their harm. Please use wisdom and prudence here.

My wife admits that, as a young girl, she was a tomboy. The world today would fight for her to be greatly confused of her human sexuality and usher her into a path that would have led her away from the beautiful Virtuous Female that she is today. When I was young, my sisters would dress me up as a girl. Today, the world would whisper all kinds of deceptive lies into my mind and seek to pull me away into a dark place, far, far from where I am, by God’s grace.

The Executive Order additionally calls for the Secretary of State to do everything possible to see that this position becomes the policy of other world governments[3]. Canada passed legislation as such early this year. Late last year it was France who did the same. Germany has already gone this route. The FTC was directed to consider this as an “unfair or deceptive act or practice” which could have far-reaching implications in areas of commerce and provide avenues for legal action against offenders.

All of this, of course, falls under our culture's new prime ethic of malevolent compassion, and it is hard for me not to see all of it as quite demonic. As such, we must always be in fervent prayer for our children, our grandchildren and our neighbors.

Let us not become weary in doing good, for at the proper time we will reap a harvest if we do not give up. Galatians 6:9