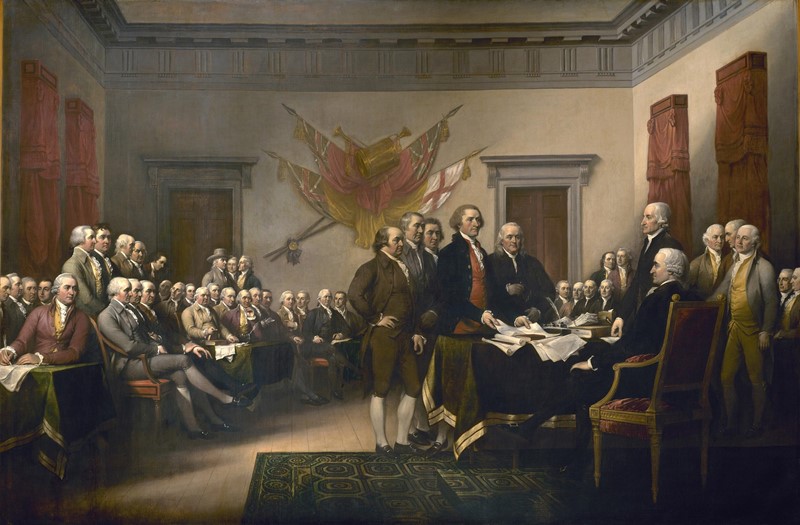 Not too long ago I was struck by two incidents that measured how we as a culture are increasingly losing the mettle to stand for our convictions.

The newly crowned Miss USA was asked if she believed that health care was a privilege or a right. She was also asked if she were a feminist. Her answers were contrary to the power of the new beast in our culture and within 24 hours she was forced to bow the knee and recant.

A West Point graduate, Army flight surgeon and war hero was nominated to be the Secretary of the Army. Shortly thereafter, the beast forced him to withdraw because of his stated beliefs. In this case, he didn’t recant, but it is becoming clearer that we are entering a period in which convictions contrary to the beast’s are going to come under fierce attack and possibly disqualify one for significant positions in our culture and even inhibit the commercial right to buy and sell.

Fifty-six men signed the Declaration of Independence, which we celebrate today. The beast in their day was the mighty power of King George and his supreme army and navy. Though the founders believed in their convictions, they knew that the beast would consider it treason, the penalty for which was death. This provided for a most somber and solemn pause in the assembly. It was in the gravity of that moment that Benjamin Franklin quipped something like: “Well gentlemen, we must all hang together or most assuredly we will all hang separately.”

There was no doubt in their minds that to stand up to the beast would prove costly. And cost them it did.

Of the fifty-six, five were captured, tortured and put to death. Twelve had their homes burned down. Two lost sons. Nine died in the ensuing war with the beast. Carter Braxton signed as a wealthy trader and died in rags. Thomas McKeam and his family were driven underground and ended up in poverty. Eight had their properties looted. Thomas Nelson directed the cannon fire on his own beautiful estate, which the British General Cornwallis had converted into his headquarters. After destroying his own home, he died bankrupt. Francis Lewis’ home and property were destroyed and his wife captured and thrown in prison where she died. His son died in British captivity as well. A few months after signing, John Hart was driven from his home where his wife lay dying. He was hunted and hid in caves only to finally return to find his fields and grist mill laid to waste, his wife dead and his thirteen children gone. He died shortly thereafter of exhaustion and a broken heart. Richard Stockton died a broken man after being betrayed by a loyalist, imprisoned, and beaten, returning eventually to find his home gutted. Only days after signing, Lewis Morris found his 2,000-acre farm ravaged, his cattle butchered and his family driven away. Similarly, Arthur Middleton, Edward Rutledge and Thomas Heyward were captured while their estates were burned to the ground. Heyward’s wife died, watching it all.

Today we fight a new beast. Do we have the same resolve? Are we willing to pledge our lives and fortunes, our sacred honor? Or will we capitulate, bow the knee and take the easy road?

This week, the beast was attempting to force a university in Oklahoma to bow the knee and remove the crosses and Bibles from its chapel. In Denver a baker still battles the beast over his Christian convictions. No question, the beast is huge, his claws are sharp, his teeth are lethal.

But so, too, was King George.

Do we have the backbone to stand?

The Remnant remains for a reason.