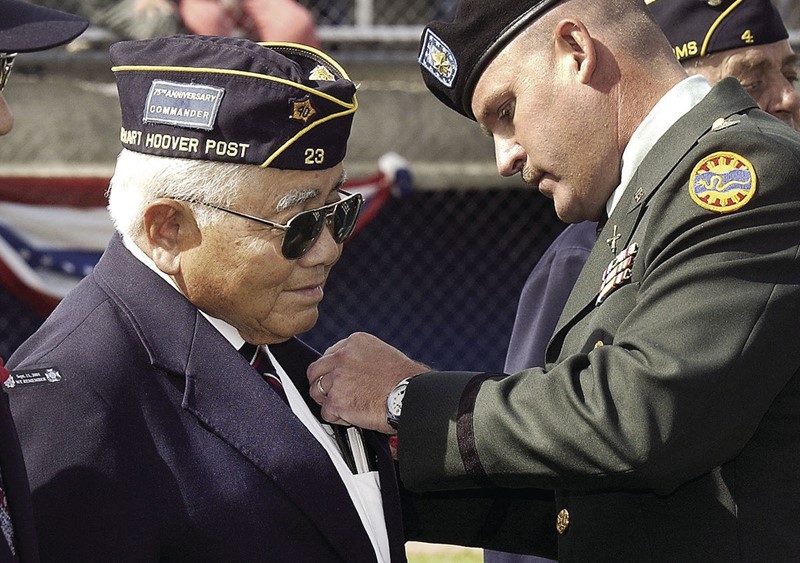 I recently returned from a trip to Idaho. This was where I grew up. I still consider it my home state.

While there, we visited a museum containing an exhibit on the Japanese Internment that occurred shortly after Pearl Harbor. Following an Executive Order by Franklin D. Roosevelt, nearly 120,000 people of Japanese descent were moved into interment camps. It was a shameful moment in our history, but there was a lot of fear… and hatred… for what had happened in the surprise attack that left 2,403 dead and most of our Pacific fleet at the bottom of the sea.

In a hallway of the museum, there was a tribute to famous Asian Americans of the 20th Century. There were astronauts, TV stars, movie stars, politicians, Nobel Prize winners… but as I read it, I knew that they had left the most important person off their list.

His name was Hero Shiosaki. And he had just passed away.

Hero was 22 years old, interviewing for a job in Blackfoot, when Pearl Harbor changed his life. He was an American citizen, but now reclassified as an "enemy alien". Soon after, many of the Japanese young men, even in the Internment Camps, volunteered to enlist and go to war. The Army formed a special unit, the 442nd Regimental Combat Team, comprised entirely of Japanese soldiers, including Hero. When Hero entered the war, his father, who had immigrated to America from Japan in 1896, told his son, “You go fight for America. And if you have to die for her, so be it.”

And die these Japanese soldiers did. The official casualty rate was 93%. They were the most decorated unit for their size in the history of American warfare. About 14,000 men served, earning over 18,00 medals, including 9,486 Purple Hearts, 52 Distinguished Cross medals, 560 Silver Stars, 22 Legions of Merit, 15 Soldier’s Medals, 4,000 Bronze Medals plus 1,200 Oak Leaf Clusters.

The 442nd would later be awarded the Congressional Gold Medal.

Their motto was “Go for broke!” and their fight song included these words: “Let’s remember Pearl Harbor, as we did the Alamo…”. All of this even though most of their families were confined in the internment camps back home.

Hero was one of the 442nd survivors. He returned to Blackfoot where he became active in the American Legion, eventually serving as Commander. He was a successful businessman, but he spent a lot of his time speaking and encouraging young people to love this country and her ideals.

This is where Hero and I intersected. I was a Junior in High School and was nominated to be one of the attendees at a program called “Boy’s State”. It was sponsored by the American Legion and consisted of bringing together young men from around the state to “take over” the legislature for a week while the real Legislature was on recess. They taught us how state government worked, the principles of freedom and liberty, and gave us a chance to put it all in practice by crafting our own bills, arguing them before the “legislature” and eventually passing them into law or defeating them. It was a tremendous learning process. We even campaigned for political positions and had our own elections. I was elected Lt. Governor and eventually elected as one of two senators to attend Boy’s Nation later that summer in Washington D.C. where we did the same thing, but now at the federal level.

This was a Kairos summer for me. I will not go into all the details, but suffice it to say that it radically changed me and I believe it was critical for what the Lord wanted to do in the rest of my life.

But, it almost didn’t happen. In fact, the odds and circumstances were dead set against it.

When I was nominated, I was evidently close to the top of the list, based on my qualifications, but the selection committee wasn’t going to pick me… primarily because my family was an “outsider” in the community. It isn’t necessary to talk about why we were outsiders, but that was just the case. And that meant I was not going to be selected to go. But Hero weighed in so strongly and so forcefully, that they eventually gave in. And the Lord used it to transform a clinically shy kid into something He could eventually use.

You see, Hero knew what it meant to be an “outsider”. His family and friends had been thrown into internment camps because they were “outsiders”. But he didn’t let that dissuade him. He didn’t let that embitter him. Even after the war, with the “No Japs” and “Japs Go Home” signs, he loved this country and the principles upon which she had been built. In fact, he became, from my perspective, one of the greatest voices for this country and the freedom and liberty for which she stood. He believed in the American Dream even though he had felt the brunt of racism by some of her people.

And when he saw an “outsider” being thrown out, he stood with the same bravery that he and the other Japanese Americans showed when the fought and died for this country on foreign soil.

That is why Hero is my hero. He always will be.

I am looking forward to our reunion some day.