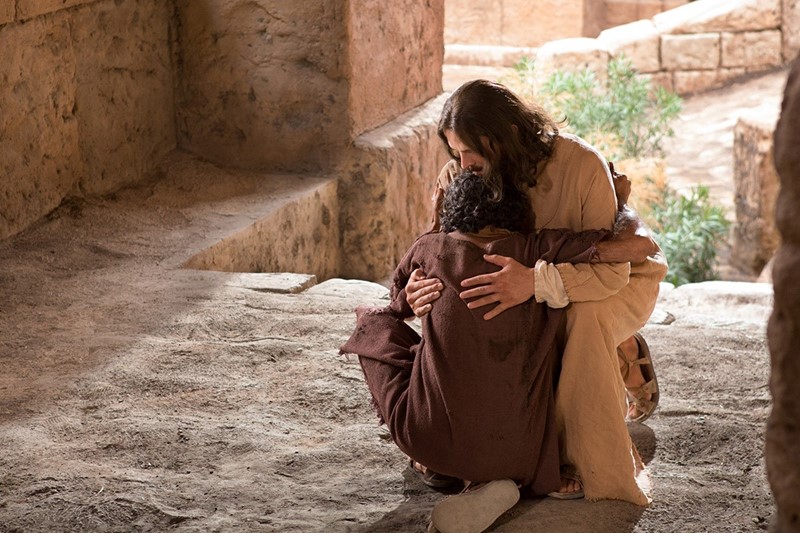 When we are sick, there is nothing we want more than to be restored to health. I can think of several times in my life when I was so sick (Lima, Peru and Cairo, Egypt) that I ashamedly admit I thought it would be better to die. That’s how “bad sick” it was. I can remember lying out in a field during pilot training after a bad parachute landing with my shoulder way out of joint. I thought I was going to die from the pain. I HOPED I would die from the pain!

But these are just physical ailments.

Much worse to be emotionally sick or spiritually sick and feel as if there is no way out. Increasingly, more people, especially young people, are seeking to “escape” life through suicide because they feel so emotionally sick (lonely, isolated, unloved, worthless) that death is the only way they think they can be “healed”. Others try to escape through alcohol or drugs or entertainment or any number of ways to attempt to numb the pain or mask the negative emotions that seem overwhelming at times, trying to pull us into a black hole.

Ah, but there is balm in Gilead. There is a great Physician… the God who heals.

If you were to tally up all of the miracles of Jesus and then classify them, by far the largest category would be His role of healing people. Here is one of the great understatements for which the Scripture is so famous:

“And Jesus was going about in all Galilee… healing every kind of disease and every kind of sickness among the people… and they brought to him all who were ill… and He healed them.” Matthew 4:23-24

Think about this: “every kind of disease and sickness … and He healed them”. Cancer? He healed it. Withered arms? Healed. Diabetes, hemorrhages, bad hearts, kidneys, gout, blindness, mute, deaf? All healed. Every kind of disease and sickness. Including the demoniacs… people who were physically, mentally and emotionally impaired due to a spiritual force. Healed by the Great Physician… Yahweh Rophe or Rapha, as it is more popularly known.

There are more than sixty references in the Scripture describing God as Yahweh-Rapha, the God who heals or restores. One of the early ones is in Exodus 15. Here is the back-story:

The children of Israel were in misery, slaves in Egypt until God intervened and restored them to freedom. God showed Himself mighty before their eyes, through the miracle of plagues, release from the captivity of a hard-hearted Pharaoh, crossing the Red Sea on dry ground, destroying Pharaoh’s army, and leading them with what must have been an eye-popping, jaw-dropping cloud by day and a pillar of fire by night. No one has ever had more open, physical evidence of God’s miraculous desire and power to restore than did the Israelites.

But they soon started to grumble and complain.

They travelled through the desert of Shur for three days without water until finally coming to what was probably a set of springs, looking cold and delicious. But the water was bad, “bitter” as can be found in similar locations in Saudi Arabia today. And the hearts of the people then turned bitter too and they began to whine and complain, “grumbling against Moses”. So Moses went to the Lord and prayed and God gave Moses a medical “instrument”, a piece of wood, which he threw into the water and it was restored and became “sweet”. God then told them that if they would listen and follow Him, He would keep them from all the plagues He had brought upon the Egyptians, for He was their healer… literally, “for I am Yahweh-Rapha”, the first time this name of God is used. And it was Yahweh-Rapha who had Elisha use instruments of a jar and salt to purify the bad water in Jericho (2 Kings 2:21) and flour to cleanse the poisonous stew (2 Kings 4:41).

As I write this, we are praying that God will use the instruments of human physicians to heal our dear friend of cancer. We desire for this to happen now, but we know that all of those in Christ will be ultimately healed, in the day of restoration, when the God of Restoration, Yahweh-Rapha, will restore everything.

And, ultimately, the real healing that we need is not physical, for our deepest and most serious disease is spiritual. Jesus made this connection plain:

On hearing this, Jesus said to them, “It is not the healthy who need a doctor, but the sick. I have not come to call the righteous, but sinners. Mark 2:17

Through Jeremiah, God spoke of how the Israelites had an “incurable” wound, that there was “no healing for their sore” and their “injury” was serious. But He wasn’t speaking of a physical wound or sore, He was talking about their spiritual state:

“… your iniquity is great and your sins are numerous.” Jeremiah 30:14

After speaking of Judah’s rebellion, sin and iniquity, calling them evildoers, sons who act corruptly, abandoning the Lord, despising the Holy One of Israel, God says of them:

David cried for healing from the Lord, but it wasn’t for physical ailments:

In Psalm 147:3, it is Yahweh-Rapha who “heals the brokenhearted and binds up their wounds.”

In one of the great passages concerning Christ’s work on our behalf, that He has healed us of our wounds… not physical wounds, but the spiritual sickness that would have separated us from God forever:

But he was pierced for our transgressions, he was crushed for our iniquities;
the punishment that brought us peace was on him, and by his wounds we are healed. Isaiah 53:5

Many, unfortunately, misunderstand this passage and make it apply to our physical ailments, when it is so clearly speaking of Christ healing us of our transgressions and our iniquities. Nowhere are we promised, in this fallen world, to be free from its ubiquitous pull toward decay. But much of our maladies are caused by spiritual rebellion. It is here that we can find rest for our souls, if we would let go of our hold on the world and what it offers, and turn to Him. Every one of our negative emotions are birthed in our belief in the lie that if we can just get our own personal script fulfilled, we will be happy and content and pleasured. But the world around us continues to step on our scripts and sometimes just downright trashes them. As long as we desperately fight for our own scripts, we will be doomed to anger, disappointment and the host of dark emotions that follow.

Are you brokenhearted? Is your soul downcast? Does a darkness pervade you from within?

There is a balm in Gilead.

Do you feel lost and alone, isolated? Are you filled with dread and fear? Does guilt or bitterness eat at your heart?

Does your past weigh upon you so heavily that you can barely take another step? Are you sick with sorrow or despair?

Behold! Yahweh-Rapha, the God who heals!

Draw near to Him… gaze upon His face.

Do not neglect the instruments of healing that He has decreed for us. Meditate upon His Word; call upon Him in prayer; and do not forsake the deep fellowship of the saints.

“The Spirit of the Lord is on me, because he has anointed me to proclaim good news to the poor. He has sent me to proclaim freedom for the prisoners and recovery of sight for the blind, to set the oppressed free, to proclaim the year of the Lord’s favor.”

Then he rolled up the scroll, gave it back to the attendant and sat down. The eyes of everyone in the synagogue were fastened on him. He began by saying to them, “Today this scripture is fulfilled in your hearing.”