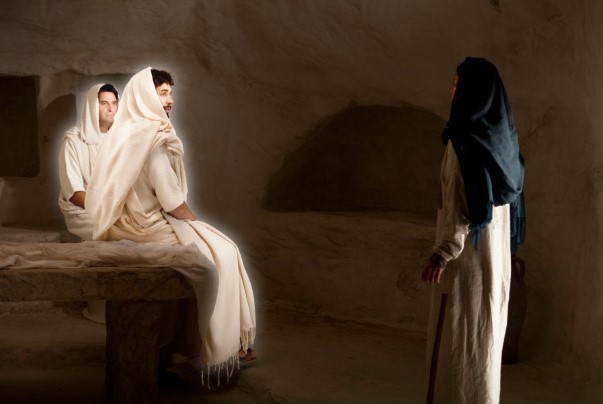 It may be too bold to say this, but I believe that it should come as no surprise to anyone that the announcement of the Lord’s resurrection was made by the angles, for this, indeed, was a cosmic moment. And, also not surprising, is that there is controversy over this: how many angels, where they were, and what did they really say. Matthew and Mark have one angel; Luke and John have two. We will deal with all of that soon.

But today, we want to ponder the fact that it was the angels that announced the resurrection and why.

Recall the great passage in Galatians (don’t skip through it… read it):

What I am saying is that as long as an heir is underage, he is no different from a slave, although he owns the whole estate. The heir is subject to guardians and trustees until the time set by his father. So also, when we were underage, we were in slavery under the elemental spiritual forces of the world. But when the set time had fully come, God sent his Son, born of a woman, born under the law, to redeem those under the law, that we might receive adoption to sonship.  Galatians 4:1-5

The advent of the Messiah was a “set time”—set by God. It wasn’t just that we landed on a nice calendar day. This was as if all the prophecies and all the promises were set on a timer and they all went off together at this moment. It was a cosmic moment: the time in which God was going to enter the world as a human being in order to redeem those who were in bondage under the law. It was a moment that began with the birth of the Messiah and extended through His resurrection… one big cosmic moment. John Calvin refers to the resurrection as “the closing scene of our redemption.”

And the privilege of announcing this cosmic moment was going to be given to the angels. They came to Mary and to Joseph. They came to Zacharias and then on the night of His birth, the heavens were filled with a host of angels announcing the news… not to Herod or to the High Priest, but to the lowly, despised and smelly shepherds. Not in a palace or in the temple, but out in the middle of a common, ordinary field.

Should we, therefore, be surprised that it would be the angels who would announce His resurrection? And, to a woman in a graveyard? We will deal more with this later, but recall that women in that culture were second-class citizens. Jesus changed all of that forever. But it was no small deal in those days that the angels would break the news to a woman, and to Mary Magdalene, who at one time had been possessed by seven demons and no doubt suffered from the ravages those demons would visit upon her.

No, this is not surprising to us, for this is who God is. God’s heart is with the humble. And He blesses His creatures by allowing them to carry out His purposes and plans. Thus, He sends angels to announce the Moment of Moments.

So, who are these “angels”?

Well, they are an amazing part of God’s creation. There are tons of them, “innumerable”, says Hebrews 12:22 and “thousands upon thousands, and ten thousand times ten thousand” says Revelation 5:11.

That is a lot of angels!

There is even some conjecture that we might each have an “assigned” angel. When speaking of the children, Jesus refers to “their angels in heaven”. This certainly is inconclusive, but there surely are enough of them to go around! Maybe that is why there are so many. One thing we know for sure, they do minister to us:

Are not all angels ministering spirits sent to serve those who will inherit salvation? Hebrews 1:14

Angels are strong. They are mighty. They battle the forces of darkness and they serve God as He sends them to fulfill His purposes. They are messengers, but they also carry out some of God’s judgments. When Herod was struck down and eaten by worms because he did not give glory to God, it was an angel that struck him. (Acts 12:23)

Scripture even says you might have come in contact with angels as they go about their duties in human form:

And so, it was the angels who kicked off the Moment and became quite active in the events leading up to the birth of Jesus. And it was the angels who ministered to Him in His times of need on earth. When Jesus had finished 40 days of fasting and had been tempted by Satan, the angels came and ministered to Him. (Matthew 4:11) When He was in agony in the Garden of Gethsemane, and His soul was “deeply grieved to the point of death”, an angel came and strengthened Him. (Luke 22:43)

I can imagine, then, how much they would have been straining at the bit to save Him from the scourge and the nails. All they needed was a word from Him and they would have swept in like a ferocious army.

When Peter impetuously cut off the ear of Malchus, the high priest’s servant, during the arrest, Jesus admonished Peter and said,

Do you think I cannot call on my Father, and he will at once put at my disposal more than twelve legions of angels? But how then would the Scriptures be fulfilled that say it must happen in this way?” Matthew 26:53-54

A Roman legion consisted of 6,000 soldiers. Twelve would be 72,000 mighty angel warriors. If one angel can buckle the knees of the guards, imagine what 72,000 would do?

So, as Jesus was being scourged and nailed, as he hung on the tree, all He needed to do was say the word and the angels would have rescued Him.

Can you imagine that? Can you imagine how easy it would have been in the midst of all of that pain and suffering to call out for rescue and relief? To just say the word and all the misery of that moment goes away?

But no, He didn’t. It was our sin and His love that held Him there—denying Himself for our sake.

The angels who filled the sky with praise and glory at His birth are now held in check, silent at His death. The earth spoke, yes, but the angels remained silent.

But! On the 3rd day, all that changed! The angels are released and silent no more. They announce the News of News—“He is not here! He has risen just as He said!”

Yes, if Jesus rose from the dead, then the angels would have been there to announce it. You could not have kept them away.

He is risen indeed!

If Jesus Rose from the Dead, then (#4) Creation Knew It and Clapped Its Hands

Now after the Sabbath, toward the dawn of the first day of the week, Mary Magdalene and the other Mary went...