(#12) Harmony in the Resurrection Accounts (Preface) 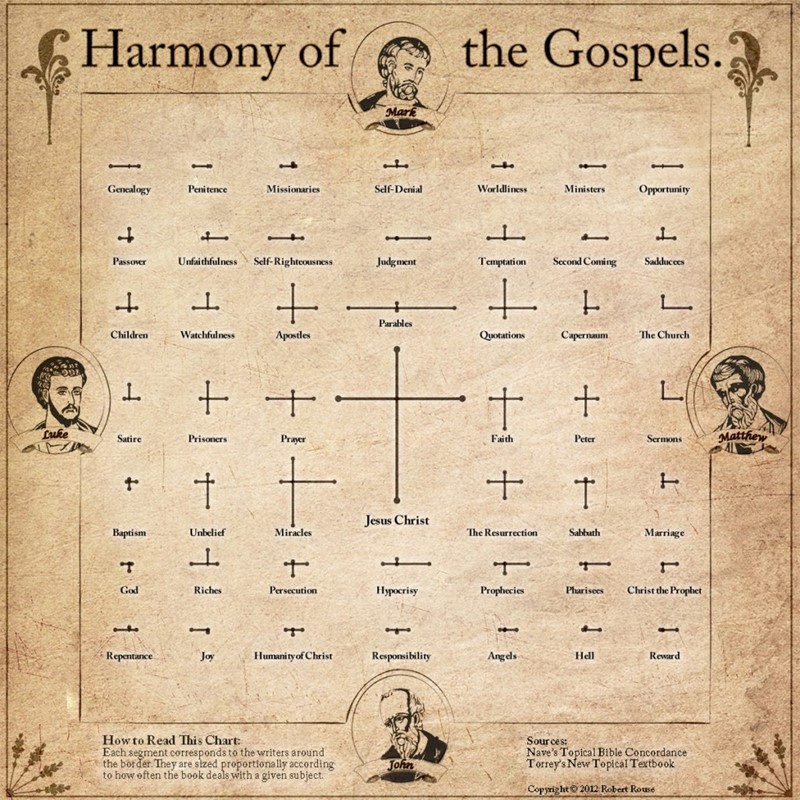 When they saw him, they worshiped him; but some doubted. Matthew 28:17

Over the last several days, we have looked at some of the charges levelled against the resurrection accounts due to supposed conflicts in numbers, timing, events and places. I believe a rational view of these things, however, leads us to see them as harmonious rather than contradictory.

This is especially true when we understand that historical narratives are, by both necessity and purpose, highly selective in their records.

We saw this particularly in Luke’s gospel, where it might seem as if Jesus appeared to the disciples on that first day and then led them out to Olivet and ascended into heaven. However, Luke continues his narrative in Acts, opening with the summary that Jesus spent 40 days with the disciples before His ascension. This is clear evidence that Luke had, in the gospel account, given us a typical “telescoping” view of selected events. Therefore, when he writes “Now He said to them…”, in 24:44, Luke has skipped forward and is picking up the story as Jesus and the disciples are now back in Jerusalem just before His ascension.

We also looked at the accusation that the women’s visit to the tomb was filled with contradictions: dark or after the sun had arisen; Magdalene alone or multiple women; did they see no angels, two angels or one; did they tell the disciples or did they tell nobody? And, we looked at the accusation that the times and places of the appearances of Jesus to the disciples are quite contrary.

Yet, in all of these, we found that they can be understood with plain logic and reason… if one truly wants to.

What we haven’t done, is to put all of this together in one harmonious narrative. I would like to do that and give you my perspective of how all of it is in such wonderful harmony, with the strong caveat that I am not rewriting Scripture here, just putting together what I might say sitting on the deck with my children and grandchildren, recounting the story of the resurrection of Jesus.

Before we can do that, however, there are more thoughts to ponder.

(1) If we read Matthew and Mark, they both say that there were “many” women who were following Jesus and that “many” had come up to Jerusalem with Him. There are five names given to us (as we have agreed to refer to them to avoid confusion):

If these are named and we have “many more”, then it is reasonable that the number of women supporting Jesus could have been a couple of dozen at least. If so, it is also reasonable that they had, at least, some informal leadership among themselves, which, with more reason, one might assume that Magdalene, Aunt Mary and Salome were looked up to by the other women as providing that internal leadership.

It is also reasonable to think that if so many had come to Jerusalem and were present at the crucifixion, then there may have been as many as twelve who were preparing spices to anoint Jesus’ body and headed to the tomb that resurrection morning, possibly in small groups led by these women. This will lead us to consider that there were several groups that had planned to meet at the tomb that morning.

(3) The statements by the angels in Matthew and Mark are virtually the same. This leads me to believe that this is actually the record of one event. Therefore, the angel that was sitting on the stone had left and reappeared in the tomb, speaking to the women who saw him as a “young man wearing a white robe”.

(5) Peter made a second visit to the tomb. The account in John when Peter and John ran to the tomb is not the same as the visit Peter made recorded in Luke 24:12. This is also reasonable. Peter and John ran to the tomb after Magdalene had told them she found it empty. She had not seen an angel yet. All Peter and John knew was that His body was gone. In Luke, however, all of the women had now arrived at where the disciples were staying. They were telling stories of angels and seeing Jesus. Peter, hearing all of this, then went to the tomb a second time. The first time he didn’t understand; the second time it was beginning to dawn on him, for he left “marveling at what had happened”. Because of the timing, it seems that Jesus would have appeared to him after he had gotten home where he was staying.

(6) We have left out the last chapter of John in all of this, not because it isn’t a great record of Jesus and the disciples fishing and then His dialogue with Peter, but because there is little controversy here.

(7) There is a confusing statement by Mark that the women saw the angels and yet, because they were afraid, did not tell anyone. Some have offered that Jesus appeared to them and then they went to tell the disciples, but not only does that not fit the timeline, it doesn’t seem consistent with what Mark is saying. Therefore, I will propose that the women who came to the tomb with Magdalene and were left there when she ran to tell Peter, were joined by Aunt Mary and her companions. They go into the tomb, see the angel, but without Magdalene, and having generated a considerable fear while waiting, they break off from Aunt Mary’s group and head back to Galilee, telling no one. This gives us a match with both Matthew and Mark and consistent with both of them relating the incident with the same angel.

(9) Matthew doesn’t record any of the appearances of Jesus with the disciples in Jerusalem, but goes directly to the mountain in Galilee. This is the opposite of Luke, who only records the appearances in Jerusalem. Many people mistakenly think that Jesus ascended after He gave the “Great Commission” at the end of Matthew, but the disciples returned to Jerusalem after that. Jesus met there and then took them to Olivet where He ascended. But, it seems clear that the meeting on the mountain which Matthew records is most likely also when the 500+ were assembled. There is a small hint for us in Matthew:

When they saw him, they worshiped him; but some doubted. Matthew 28:17

It is a stretch to think that this is talking about disciples. It is more reasonable to conclude that the 500+ were on the mountain as well and some of them doubted.

Isn’t it interesting? Who can imagine seeing the risen Lord and doubting? Yet, we see the same today. We have all of this evidence, and some still doubt… some remain blind.

Okay, with all of that, here is how I would then relate the harmonized resurrection story to my children and grandchildren… (continued tomorrow)