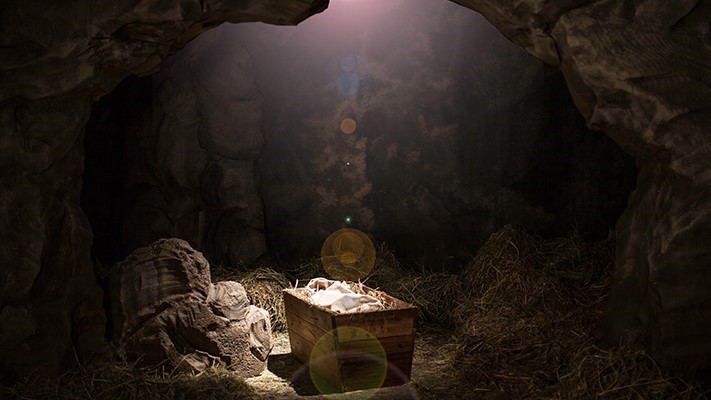 And the Word became flesh and dwelt among us. John 1:14

I suppose no truth claim found within the biblical worldview can match the sheer awe brought about by the incarnation.

Wayne Grudem puts it this way:

It is by far the most amazing miracle of the entire Bible—far more amazing than the resurrection and more amazing even than the creation of the universe. The fact that the infinite, omnipotent, eternal Son of God could become man and join himself to a human nature forever, so that the infinite God became one person with finite man, will remain for eternity the most profound miracle and the most profound mystery in all the universe.   - Systematic Theology, p. 563

The mystery of what we celebrate on Christmas, though it had begun nine months earlier, is almost incomprehensible. In fact, so mysterious is this truth, and so difficult to comprehend, that this teaching of Scripture has been the subject of numerous attempts to wrap it up in a neat doctrinal statement. Early on was the attempt to define the incarnation as Christ having a human body, but not a human mind or spirit (Apollinarianism). Nestorianism defined the incarnation as Christ having two separate persons and Eutychianism tried to amalgamate the human and divine in a way that left Jesus being fully neither. In 451 AD, at Chalcedon, we finally summarized the incarnation of Christ as the mystery of Him being both fully human and fully divine. As Christ took on flesh, He remained fully God, but He was also fully human, now part of the human race, born under the curse of the law and suffering the physical limitations of the flesh and its temptations. Although this is a mystery and hard to comprehend, it is the only way to make sense of what the Scripture teaches us about Christ.

We are not strangers to the “mysteries” of trying to comprehend divine and spiritual things. We can summarize the truth claims of the Trinity, but it remains mysterious. We can speak of the new birth in Christ or the spirit and flesh elements of the human being, but our attempts to resolve all of the unknowns still have left us in wonder. Those of us who have been saved by Christ have been united with Him, “unio mystica” we call it, because it is mysterious and too wondrous for us to fully comprehend. Berkhof says the incarnation is

… a miracle that passes our limited understanding. It clearly shows that the infinite can and does enter into finite relations, and that the supernatural can, in some way, enter the historical life of the world.”

How astounding is it that the holy, infinite, eternal, omnipotent God would humble Himself and forever join Himself to our human state. Nothing can begin to describe or explain the depth of God’s love for us that He should do such a thing. No words can do justice to this amazing grace.

This is the wonder and the awe of the “O Holy Night”.

May the Lord grant us the grace to look more deeply at this most astonishing miracle that took place 2000 years ago.