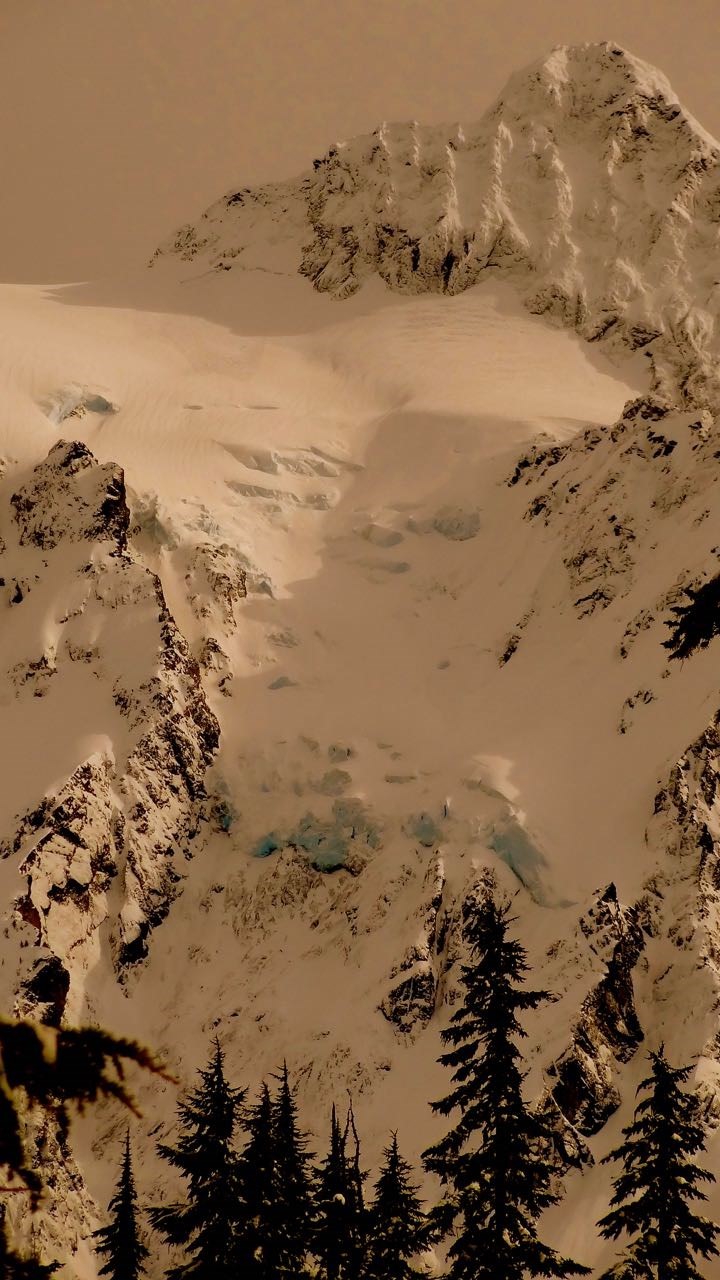 I just got home from filming a segment for the documentary “Is Genesis History?”

We were with Dr. Larry Vardiman in northwest Washington State.

Mt. Baker holds the world’s record for annual snowfall: 1140 inches…nearly 100 feet of snow. That is why we were there. There is a gorgeous glacier on a sister peak, Mt. Shukstan, (my picture above) that was breath-taking.

Our purpose was to talk about the Ice Age and the issue of Ice Core dating.

There is too much to relate here, but the key thing that we talked about was that you don’t get an Ice Age by merely turning down the temperature. That is a misconception. A cold earth, by itself, would not get you an “Ice” Age. It might get you a “Cold” Age, but it couldn’t produce the amount of snow and glacier ice that is associated with an “Ice Age” as we commonly think of it. Cold air holds less moisture and the colder it gets, the less it holds. The old saying “It’s too cold to snow" is technically true.

So how do you get an Ice Age?

There are two key prerequisites that have to be present: a very warm ocean and, at the same time, cold continents. This seems to be incompatible. But that is the point. An Ice Age isn’t easy to come by. Normal conditions don’t get you there. An Ice Age isn’t something that just happens every once in a while with the normal, small fluctuations in the earth’s climate. That is why scientists who follow the conventional paradigm confess that the Ice Age is a puzzling phenomenon. This mystery has resulted in many different theories (68 at one count) and multiple Ice Ages (as many as 30 or more). But the reason for the lack of clarity is primarily due to the extremely unique and contradictory factors that must be in place in order to have an Ice Age.

A uniformitarian view of earth history isn’t going to get it.

You need something strange to happen…very strange and very abnormal.

So what could have created very warm oceans and cold continents simultaneously?

Dr. Vardiman is a “paleoclimatologist”. That means his specialty is in studying the earth’s climates in the past. He is convinced that we have only had one Ice Age and it occurred immediately after the catastrophic events of the Flood. That catastrophe, recorded for us in the ancient records, provides exactly the kind of unique conditions necessary to bring about an Ice Age…for which, by the way, we have a great deal of evidence all around the world.

At the start of the Flood, there were massive eruptions in the oceans, “the great deep”. Some of those released water bound up below and others released hot magma. If you study a map of the ocean floors, you will find the remnant of this in what looks like a huge “baseball seam” that extends around the world. The hot magma, and possibly the high friction caused by the movement of the tectonic plates, heated the oceans to almost 100 degrees. There is sufficient evidence in seabed cores that substantiate ocean temperatures this high. At the same time, the volcanic ash, among other particulates, reflected the sun’s heat and lowered the temperatures on the continents. This created both elements necessary for an Ice Age. The warm oceans, even in the Arctics, then produced huge amounts of evaporations and the colder continents and the atmosphere turned this water vapor into massive amounts of snow. The earth’s climate during this 500-year period was radically different that today. The air currents over the oceans and continents produced a continual series of huge snowstorms that laid down thousands of feet of snow. As the snow depth grew, the weight compacted the snow below, pressed out the air, and created layers and layers of ice. Some of that ice became glaciers (which move) and some became ice sheets (more stagnant)…even as far south as St. Louis, Missouri in North America.

This single Ice Age was a transitional epoch that extended from the end of the Flood for hundreds of years until the oceans cooled sufficiently to end the high rate of evaporation.

Dr. Kurt Weis, whom we filmed earlier, spoke of this unique period as the “Arpachshad Epoch”, named after Arpachshad, one of Noah’s grandsons. It was a period in which the earth continued to “tremble” for hundreds of years after the deep catastrophe of the Flood. It was marked with massive secondary floods from trapped water, but more importantly, significant and numerous volcanic eruptions. These eruptions would have kept injecting high amounts of aerosols into the atmosphere, blocking the sun and keeping the continents cold while the ocean remained warm enough to continue evaporating large volumes of water into the atmosphere.

Climate models, when seeded with the assumptions of the catastrophic Flood, predict a massive amount of ice and snow, sufficient to explain all of the Ice Age evidence that we find around the world. Those models also predict that some portions of the earth would have been devoid of glaciation and some areas would have been actually dry enough toward the end of the Ice Age to create huge dust storms. Dr. Varidam and others believe these dust storms are partially responsible for some of the post-Flood extinctions and also provide an answer for the disappearance of the wooly mammoths and how some have been found strangely preserved, frozen in the permafrost of Siberia and Alaska.

I was also fascinated by our discussion of the evidence in the ice cores. The conventional paradigm tells us that the ice cores in Greenland and the Antarctica prove not only multiple ice ages, but also long time periods…in the hundreds of thousands of years. But Dr. Vardiman was adamant that the evidence doesn’t support those conclusions.  In fact, he excitedly told me that the ice in Greenland has preserved everything from the beginning of the Ice Age following the Flood and that an examination of the ice cores show the high volume of volcanic ash at the bottom, just as would be predicted from a Genesis paradigm.

I am increasingly amazed at the intelligence and dedication these scientists have. They have faced a tough road in our current scientific world. The conventional paradigm has tons of money that can fund its research. Creation scientists get none of that. Many are hounded or thwarted during their university studies, exceedingly so, as has been documented by various studies, including Bergman’s “Slaughter of the Dissidents”. But these men have remained faithful and are increasingly convinced that the evidence, if looked at without bias, points to the historical narrative that we have been given in Genesis.

[For those of you who have asked, we hope the film will release this Fall.]

Hummingbird iFlower Sometimes things occur so quickly that you barely have time to register what ...