Standing by While the Weak Are Raped 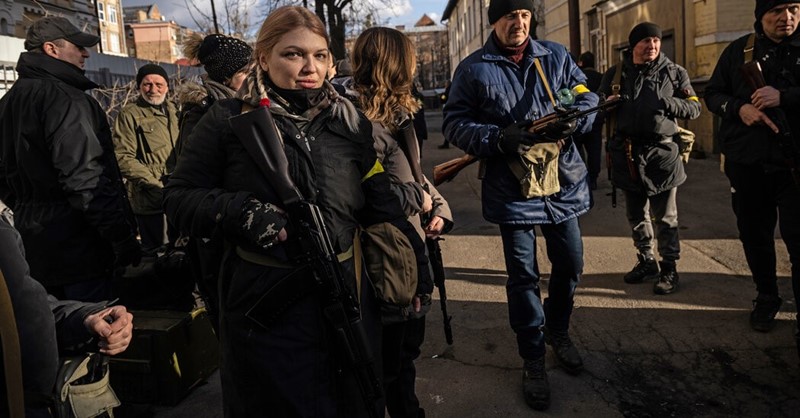 We have all heard of the unforgivable situation where people stand and watch someone being mugged or beaten to death. I wrote earlier about the brazen nature of crime in our country and how people simply stand by and watch it happen, afraid to intervene.

This, of course, is what happens when we lose the vision and responsibility of being Noble Males and Virtuous Females. We care more about ourselves and our own peace and pleasures than sacrifice, especially when we have been stripped of the will and ethic to declare anything evil.

So, here we sit and watch Ukraine and Ukrainians, without provocation, being mugged and beaten by monstrous and bully Russia. I listened to a broadcast yesterday in which the news panelists were lauding the fight the Ukrainians were putting up. It made my heart both proud and sick at the same time. I am thrilled to hear of their resistance. Young and old, men and women taking up arms, risking all, to defend their freedom and homeland.

And I am sick at heart because we find ourselves standing on the sidewalk cheering for a woman who is being raped—calling out to her to fight harder. Maybe we toss her a stick with which to struggle on.

Why? Because we are too afraid to step in and defend her. Too weak in mind and heart and character to risk and sacrifice to fight alongside her.

In 1994, it was the U.S. that finally convinced Ukraine to give up its nuclear weapons. They had the third largest nuclear arsenal in the world. We induced them with the assurance of U.S. security support. They gave in, though they were still deeply concerned about Russian aggression. We, in turn, along with Russia, assured them not to worry, for we would be with them. Russia, no doubt, was laughing behind closed doors at our foolish naivety. Ten years later, Russian troops marched into Ukraine and took over Crimea. We did nothing.

And today, we do nothing except throw a bone to the Ukrainians and cheer them on.

Stopping Putin requires the threat of full force. It requires the bold statement that this is an act of war and it will be met as such by the free world. Simply throwing a bone will merely encourage him because he knows we will not act. I fear sanctions alone will merely cause him to puff his chest. In response to them, he has raised the specter of nuclear war. It is possible he might even detonate a nuclear warhead somewhere, maybe off the coast of England. If so, it is likely we will cower and capitulate. Do we no longer have the will nor the character to fight… for anything?

After Ukraine, does any one doubt that Russia will simply take whatever it wants?

God cares for the weak and the needy. That is why there is something Noble and Virtuous in defending the oppressed… why the righteous step in to protect the downtrodden.

Ukraine is pleading for people to come and join them in their just cause. If I met their requirements and had the physical ability to help rather than hinder, I would go. My wife said she would as well.

Pray for Ukraine. Pray for the Ukrainians. Pray for those who have the ability to stand up to this most perilous action by Russia: for nations and businesses and individuals who have the character to come to the rescue rather than stand by and watch. If sanctions are all that the world has to offer, then pray the Russian people will be so strained by them that they will rise up themselves against Putin, despite the cost they will pay against this tyrant. Pray that North Korea and China do not take courage from this and we then find similar actions on three fronts.

Pray for the character of our own people and nation.