The Genesis Issue: the Role of Science 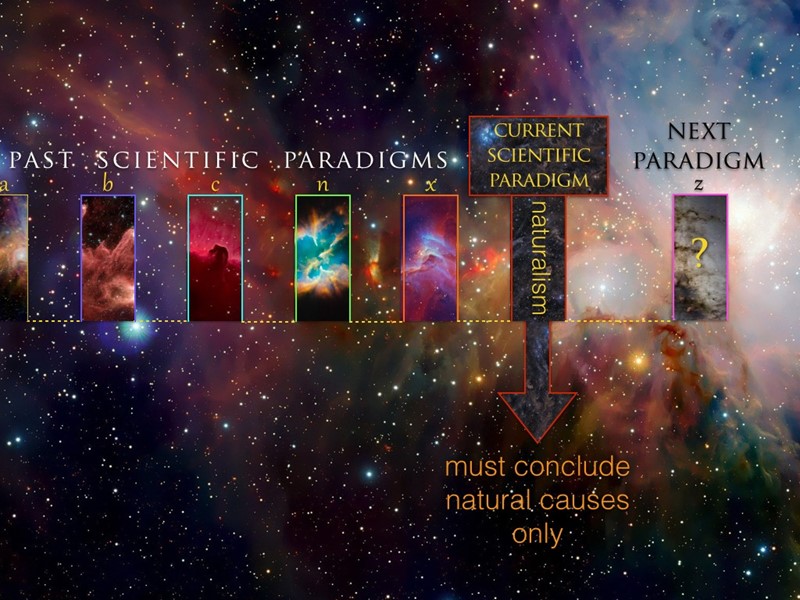 Thomas Kuhn, in his radical book, “The Structure of Scientific Revolutions” chronicles the rise and fall of what he calls “scientific paradigms” throughout the history of science. As each paradigm arose, it laid claim to how one thought of science and how one “did” science. It even crafted the definition.

While a paradigm reigned, it controlled the questions and answers—not through some sinister tyranny—but because it set the framework and boundaries, and one’s thinking just naturally stayed within that box. At some point, however, reality and pesky observations that didn’t “fit” the framework mounted up until the paradigm collapsed under their weight and a new one arose… a paradigm that drew a different box, attempting to minimize all the rogue data points. But, alas, over time, that paradigm began to be troubled by its own maverick observations, and, taking its place in the dustbin of scientific paradigm history, it, too, collapsed, giving way to the next. And so it has gone, up to the present.

Kuhn’s book, as you can imagine, didn’t set well with the scientific establishment, for it raised questions about whether or not the reigning paradigm really had a lock upon scientific truth as it loudly claimed and as every paradigm before it loudly claimed. One only has to remember the complex epicycles that were constructed when Ptolemy’s framework reigned to visualize how a paradigm struggles for years and years to hang on in the midst of increasingly troubling observations. I believe we are seeing history repeating itself today.

It is important to keep in mind, therefore, how fallible science really is, especially in a culture that carries an almost divine view of the current paradigm. This is, unfortunately, what many Christians have done when they put their faith in a paradigm that, in my opinion, will most likely soon collapse.

The current scientific paradigm can be roughly assumed to have arisen around the publishing of Einstein’s theory of relativity. But it wasn’t his theory that was the major change from Newton. It was the deep and total wedding of the new paradigm to the philosophy of naturalism. This is important to understand, for the paradigm was now bounded by that philosophy. No matter what the observations were, no matter what the evidence was, the paradigm must always point to natural causes. Indeed, you are not able to publish any research or textbook that points to anything but a natural cause. And because it has defined “science” this way, if you do research that does point to a supernatural cause, your work will be labeled “pseudoscience”.

This is the accusation leveled at those who support or are working in the “Intelligent Design” arena. When we did a Cross Examine show on Dr. Guillermo Gonzalez, he talked about how he was denied tenure because he authored an Intelligent Design textbook “The Privileged Planet”. The book didn’t name “God” but it pointed to a “cause” that wasn’t random and mindless. Ben Stein’s movie “Expelled: No Intelligence Allowed” attempted to chronicle this almost militant position that the paradigm has fortified against those who dare point outside of the cosmic box of naturalism.

When a paradigm reins, those boundaries of thought and inquiry are found to be ubiquitous within the culture, extending to not just the centers of cultural power, like academia and the media, but to the common man. I have often, in discussion with people regarding the work of “creation” scientists been met with the response, “but that’s not science”. Of course it isn’t if you accept the current paradigm’s definition that all scientific inquiry and conclusions must be consistent with naturalism.

But it wasn’t always this way.

Consider several paradigms ago, during the days of Johannes Kepler:

“The chief aim of all investigations of the external world should be to discover the rational order and harmony which has been imposed on it by God.”

This was a paradigm, though inadequate in some of its conclusions, which allowed for scientific inquiry that could point to both natural and supernatural causes.

That would be labeled “pseudoscience” under the current paradigm.

Let me give a real life example as to how this works.

Dr. Francis Crick was the co-discoverer of DNA. When he realized what they were looking at—the immense complexity and exquisite order of something akin to millions and millions of lines of computer software code, fully debugged and elaborate beyond anything we could dream of creating—he was struck by the impossibility that it could have arisen even with the billions of years within the framework of the paradigm. But he was bounded and constricted by that paradigm to only point to natural causes. Therefore, instead of concluding the way Kepler would have concluded, Crick posited the theory of “Directed Panspermia”… the theory that life must have come from outer space.

Now, this obviously doesn’t solve the problem of how such deep complexity can arise by random processes just because you throw it off to another planet, but it fell within the paradigm’s code of conduct and so it was an acceptable theory.

Dr. George Wald provides another insight into the power of a paradigm’s covenant:

In the Truth Project, I laid out the relationship of scientific observation and God’s Word. I labeled the later “Primary Truth” (Special Revelation) and the former “Secondary Truth” (General Revelation). I did so because I believe that we are called to begin with the Word of God as inviolable and we interpret the world around us in that light. Yes, it is true that the Bible does not speak of the atomic weight of uranium nor the amount of gravitational force that one body imposes upon another. God has given us the ability and the privilege to discover Secondary Truth from our observations. But when those observations come into obvious conflict with His Word, we must stand on His Word first. Now, it is also true that the Scripture does speak in genres other than historical narrative on occasion and many have undertaken the attempt to treat Genesis in another genre in which it can be liquefied and molded into the paradigm’s conclusions. And, I would be the first to say that if Genesis were written in poetic or metaphoric form, I would be more than willing to consider the paradigm’s reasoning. But it clearly is not any genre but historical narrative and there is nothing in the text, nor the words of Jesus when referring to Genesis, nor God’s word to Moses and the children of Israel when He implemented the Sabbath for them, nor any other place in the Scripture where it points back to Genesis that would indicate the text is anything but historical narrative.

This is why we interviewed Dr. Steve Boyd, considered one of the world’s best Hebraists. He said that the genre of Genesis is unquestionably historical narrative and anyone who wants to interpret it in another genre is doing so because he is first being driven by a belief that is external to the text.

Finally, it seems to me that the current paradigm is becoming increasingly unstable. As we discover more and more exquisite complexity within the living cell—amazing tiny machines performing sophisticated and inter-related tasks—it is difficult to rationally hang on to the “random-mindless-natural-processes-did-this” explanation. The more we study the rocks and fossils, the more untenable is the old theory that the layers and fossils were formed slowly over long periods of time. I have long thought that if Genesis didn’t record a global flood, science would propose it. Radiometric dating is being questioned. Soft dinosaur tissue is again roaming the earth and stirring up trouble. The big bang is exploding. Observations are now leading many to think the earth is headed toward a cooling cycle. And who knows if coffee is good or bad or good or bad for you.

But beyond the evidential problems, the human soul can only take so much of a philosophy that declares there is nothing spiritual about this world and our existence… that we are merely cause and effect machines with no souls that survive death and no ultimate purpose or meaning to our lives—a philosophy that will increasingly move toward more and more suicide and more and more violence as we increasingly embrace the underlying cosmic “truth” of “the survival of the fittest”. It is this hunger for something “spiritual” in a paradigm of only matter and energy that is driving why we see such a flood of movies and media that are filled with vampires and zombies, super heroes and the paranormal, and, of course, “the Force be with you”.

The current paradigm will collapse; all we have to do is look at history to know it will. The question is, what will take its place? If nothing else changes, it could be some form of the paranormal or an alien-based framework that tries desperately to draw another box to minimize all the pesky outliers—outliers that will never be understood without committing oneself first to the plain truth that the real Creator gave to us a long time ago.

Please, don’t put your faith in a temporary paradigm that is bounded by naturalism and teetering under the weight of contrary evidence. Put your faith first in God’s Word and then interpret the world through His lens.

[PS… for those who do hold a different position in all of this, please accept my observations in the light of Christian love in which I intend for it to be read. Blessings to you.]

Hummingbird iFlower Sometimes things occur so quickly that you barely have time to register what ...