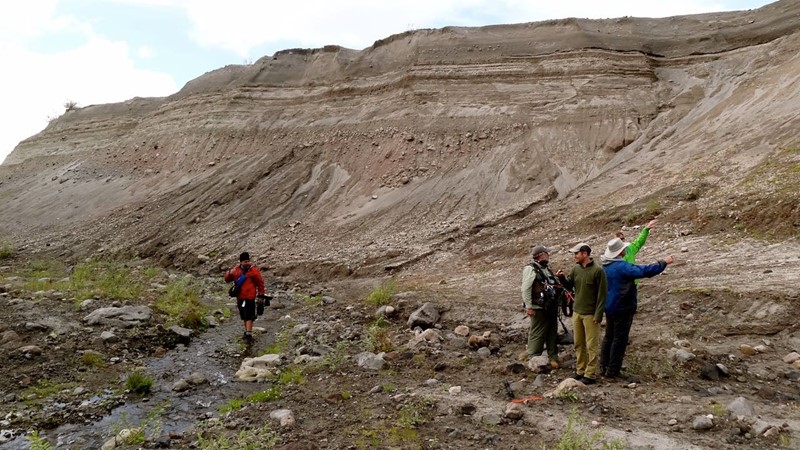 This is a picture from inside “Little Grand Canyon” at the base of Mt. St. Helens. The obvious is the film crew, Tom, Michael, Thomas, and Ian. Dr. Steven Austin, an incredibly smart geologist, is there as well (in blue).

The other obvious things are the layered canyon walls and the stream.

Here’s what is not obvious.

Even though it might look really old, like a lot of the geological formations you might see around the world, all of these are younger than I am.

Prior to the 1980 eruption of Mt. St. Helens, none of this existed.

The various debris, ash, mud and pyroclastic flows filled the lower areas and created instant layers, perfectly sorted. In some places, large sections of glacier ice from the mountain were trapped beneath the hot flows. The ice turned to steam and was venting for days. It created a surreal landscape. When the steam built up too much pressure, they exploded and created “explosion pits” that resembled craters on the moon. Those pits were later filled in by more mud flows and then, on March 19, 1982, almost two years after the initial eruption, a mud flow cut through a breach and back cut what is now called the Little Grand Canyon.

The standard geological story would look at a canyon like this and, using “the present is the key to the past”, calculate how much material is currently being removed by the little creek and give us a very old age. Several rocks there have actually been dated from 350,000 years old to over 2 million years. If we hadn’t witnessed this event, we would accept the standard story that this canyon was formed a long, long time ago.

It is actually younger than my first two children.

Standing in the bottom of that canyon, looking at the steep canyon walls, the layers, the complex geological formations, I was struck by how this looked just like all the other exposed layers around the world…layers that I had been taught required millions of years to deposit and then erode.

However, when you come face to face with the facts from the past, it can radically change your perspective of the present.