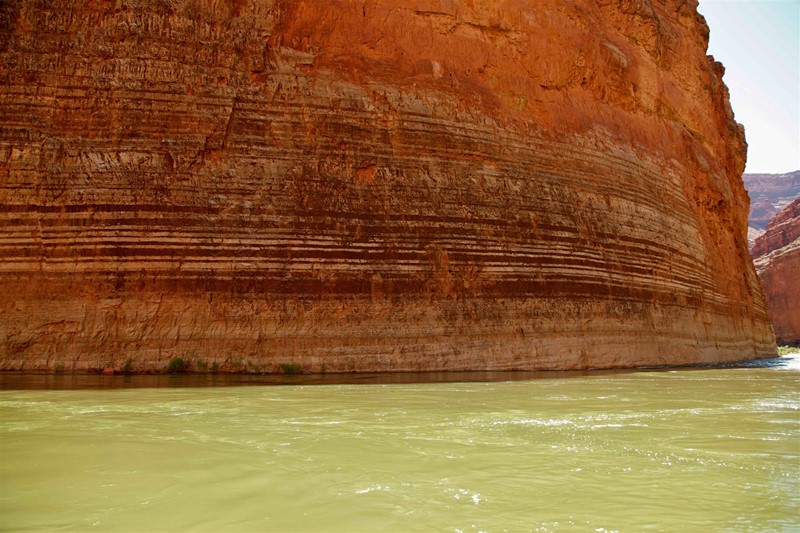 Next to the enormity of the Grand Canyon, the most prominent feature is its strata…the many sedimentary layers that make up the canyon walls. The layers are quite unique, distinct and massive, both in their vertical depth and lateral or horizontal extent, some extending up into Canada, for example. They are also quite undisturbed, meaning the layers form neat lines without signs of erosion. There are places where the layers are “folded”, looking like the old ribbon candy that was once popular at Christmas time. Additionally, they contain fossilized creatures that appear to have been buried rapidly in material that was not static, but flowing…sometimes tumultuously.

This is not what the conventional story would expect.

But, if the layers were laid down by a global flood of biblical proportions, these are exactly the things we would expect to find.

There are still questions to be answered, for sure. Many already have been. It was once thought that limestone could only be laid down as a very slow process and therefore the massive Redwall Limestone layer had to have required millions of years to form. But now we know that limestone can form quite rapidly. The tiny layers, called laminae were once thought to be indicators of yearly cycles, like tree rings. But now we know that laminae can be laid down almost instantly, like we saw the many llaminae layers formed in the Little Grand Canyon at Mt. St. Helens in a matter of hours. We can actually create multiple laminae layers in the lab in minutes. Scientists insisted that the cross bedding in the Coconino Sandstone layer was made from wind blowing over sand dunes. We now know that they were under water dunes, complete with tracks of creatures trying to escape and being swept laterally with the current.

However, there are other questions that need to be answered and, hopefully, there will be more young people who will sense the call and gifting of the Lord to enter into the sciences and be a part of examining the evidence without being shackled by a worldview that cannot include the historical records from the Bible nor include the notion of God. It is a tough road for creationists. Academia will not be rooting for you and may even be pushing against you. Getting papers published in this environment is very difficult if you don’t write in support of the sacred cow. But, if you are called and gifted to be there, then there is no better place to be. It is your divine calling.

And, it can be done. Great scientists like Dr. Steve Austin have done so. You can as well.