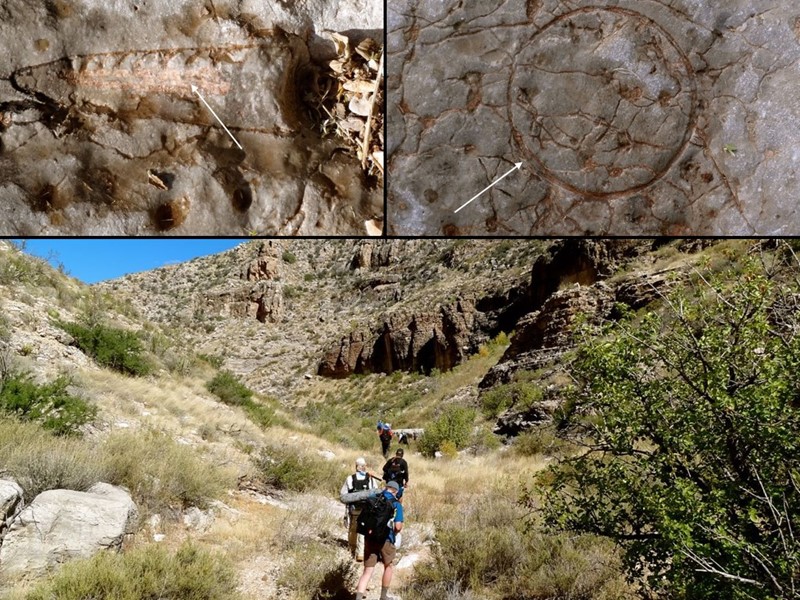 We have hiked even deeper in to the Hualapai Reservation to look at a bed of nautiloid fossils.

A nautiloid is a squid-like creature that lived in a long cone-shaped shell. They were predators and could reach four feet in length. Although they don’t exist today, they were prevalent at the time of the flood. Dr. Austin led us to one of his favorite places where he had found 21 nautiloids exposed in a flat rock layer of the upper Redwall Limestone.

The conventional story is that fossils come about when creatures die, sink to the bottom of the ocean, and are then buried slowly by a gradual sedimentation deposition. Imagine how a four-foot nautiloid could be suspended vertically for thousands, if not millions of years, as sediment was slowly building up around it so that it could be eventually fossilized.

The only explanation is that this nautiloid had to be buried rapidly. In fact, it is the argument for virtually all of the fossils…any of the fossils. When a creature dies, it decomposes rapidly or it is scavenged. It doesn’t remain intact for weeks, let alone years. If it is to be preserved by fossilization, it has to be buried quickly and catastrophically.

Dr. Austin has been studying the nautiloid fossils for a long time and he stated that about one in seven are in a vertical position. Not only that, but they all seem to be oriented in a similar direction. All of the ones we saw, other than the vertical one, were parallel to each other. Dr. Austin believes this indicates that the nautiloids were being tumbled in a mudflow until it eventually came to rest and they were “frozen” in the positions we now see them. He believes there are billions of nautiloids buried throughout the Grand Canyon.

How could all of this happen?

The best paradigm is the catastrophic flood that is recorded in Genesis.