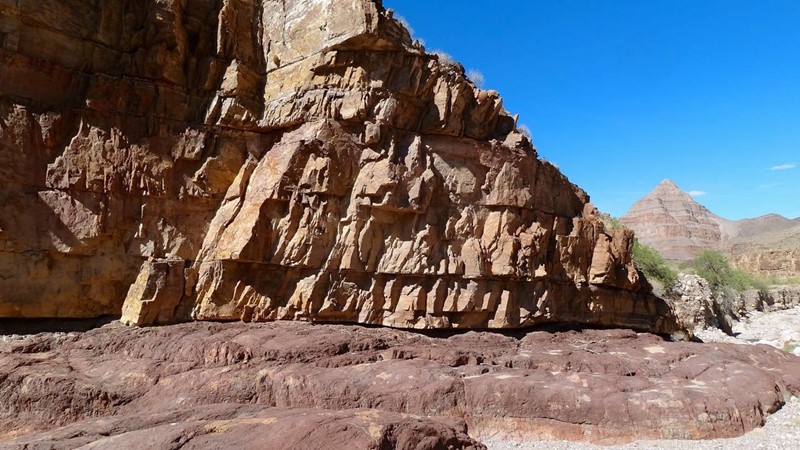 We are on a special permit many miles deep into the Hualapai Reservation (pronounced wal-a-pie) along Diamond Creek.  The formation we are looking at is called “The Great Unconformity”. It is the boundary between the metamorphic “basement” rocks below and the sedimentary layers that extend, in some places, three miles up. The purple looking rock is granite. The khaki looking layers above are called the Tapeats Sandstone. This Unconformity boundary is prominent here and it can be found all over the world.

The conventional story is that this boundary represents close to half a billion years of elapsed time. In other words, the lower rocks were formed and then 500 million years went by before the sediment was laid down on top of it as the result of a slow process of material settling to the bottom of a placid ocean over millions of years.

The Genesis record leads to a radically different conclusion. The granite most likely represents the original creation rocks and the sedimentary layers on top of it were laid down rapidly during the flood.

There are several things about this that are interesting to note:

The top of the granite at the boundary has been “sheared” off. The shearing force pulverized and ground up the top portion of the granite almost like a piece of colossal sandpaper grinding it down to the boundary line we see. The pulverized granite was then suspended in water and it became part of the sediment in the layers that were deposited above.

The Scriptures imply that the flood of Genesis 6-8 was a whole lot more that the nursery rhyme that sings, “The rain came down and the floods came up”. This was a breaking open of the crust of the earth. The fountains of the great deep burst open. Other passages lead us to believe that the crust under the oceans might have risen and the massive water of the sea began to pour onto the land.

Dr. Austin gave us four ways that water can tear down other material. One of those was called “cavitation”. This is a very interesting physical phenomenon that occurs when water is moving rapidly. When it encounters an obstacle, it flows over that obstacle and creates a vacuum that can reach extraordinary levels of explosive, hammering pressure, up to tens of thousands of pounds per square inch. When the Glen Canyon Dam was in danger from excessive run-off in 1983, they opened one of the overflow gates to take pressure off of the dam. Water flowed into the tunnel that had been cut into the solid granite walls of the canyon for this purpose and lined with concrete and reinforced steel. Within seconds, the dam was shaking and the water flowing out the end of the tunnel had turned pink. They quickly shut the overflow gate. When they inspected the tunnel, the water had pulverized the concrete, the steel and had eaten into the granite…all within a matter of a few minutes.

This is the enormous power of water. And it is evident here at the Great Unconformity.

Additionally, if the conventional story were true, then the granite rocks would have been a top surface exposed to erosion, just as the top surface is now. If you look at the top layers in the picture, you will see what we all see around the world: evidence of erosive forces. In the background you can see Diamond Mountain and the effects of erosion there are quite evident. However, the Great Unconformity shows none of that. The evidence for a half billion years just isn’t there.

However, the catastrophic power of enormous amounts of water, moving at high speeds, pulverizing the granite basement rocks and tearing up the rest of the earth’s surface and then laying down miles of sedimentary rock, rapidly, layer upon layer, burying and fossilizing all kinds of living creatures, is a consistent picture of what was recorded for us in the ancient documents.

Tomorrow we will look at the fossils.