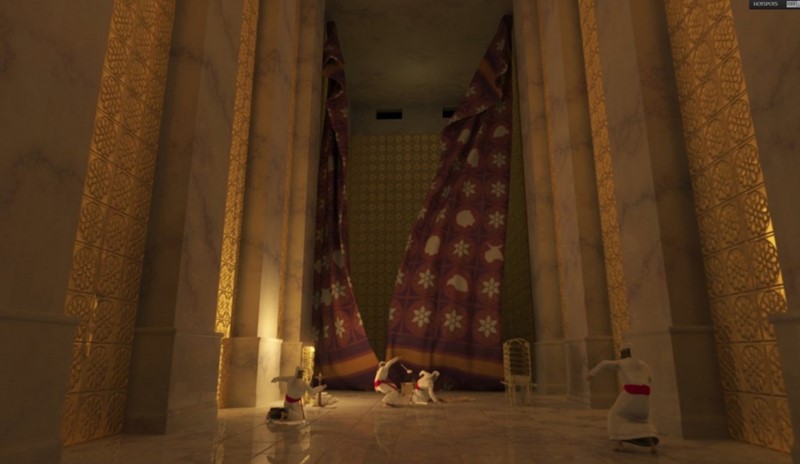 I tremble writing this devotion of gazing upon the face of God, for I sense it could be the most important of all. J. I. Packer writes that the whole of the New Testament could be summed up under the heading “the Fatherhood of God” and that it is in this name that we find the “climax of the Bible”.

I fear my words are not capable of doing justice to this aspect of God’s nature. My prayer is that His spirit will make up for all that is lacking here.

When God introduced Himself to Moses, He gave him the name by which those under the Old Covenant were to primarily know Him: “the great I Am”… “Yahweh”. Appropriately, this Name focused our eyes upon the self-existence of God, his majesty and sovereignty, His holiness and purity, His utter transcendence and the absolute separation that existed between God and man. Nothing illustrated this more than the Holy of Holies, where only the High Priest was allowed to enter once a year and then only after a thorough ritual cleansing. Moses was not permitted to see the face of God lest he die and was told to take off his sandals, for while Yahweh was present he was walking on holy ground. The Law, therefore, became central in the Old Covenant—a revelation and daily reminder of man’s inability to sufficiently purify himself before this Holy, Transcendent Yahweh. A personal relationship with God was not primarily in view here.

But under the New Covenant, something radically changed. God did not change, but because of the work of Christ, the relationship with God changed and the New now revealed what the Old held in the shadows. Not only is Christ unveiled, but through His propitiation, God has acted to make us His children and He, our Father. This title has become the primary name of God for those who are now in Christ Jesus.

In fact, under the Old Covenant, the Jews considered it blasphemous to call God “Father”. They wanted to kill Jesus for saying such. But now, under the New Covenant, the Scripture explodes with this name of God. Jesus teaches us to pray, addressing God as our ‘Father’: “Our Father, who is in heaven, holy is your name.” Notice that God has not changed. He is still “Holy”. But because of Christ, our relationship to Him has changed… radically.

The veil has been torn!

As we read in Hebrews, we have been granted to enter the holy place, through the veil, because of the work of Christ. But this is not just getting to go in to the holy place… we walk in there because we are a son or daughter of the great I AM.

We are even enjoined to come boldly before Him!

… and call Him Daddy!

And this is not because of anything we have done, but because of the grace of God and His act of adoption whereby we are now declared to be His children.

So too, is God’s sole action to adopt us into His family… given rights as sons and daughters… now a child who has the privilege to call the holy, transcendent, I Am, our Father.

By the way, have you ever noticed just how “family” all of this is? We now call Him Abba, Daddy, Father. He calls us “sons”, children. Jesus is not only called our brother, but He is also called the Bridegroom and we are called the Bride. These are “family” names… and that is what we are now.

Maybe there is a clue here as to why the enemy is so fiercely dedicated to destroy the family on earth: he is determined to destroy any relational meaning behind these precious words.

When we contemplate the immensity of what it means to have God as our Father, the implications are profound. We are rightly in awe of the grace extended to us for our salvation—the justification that comes to us through Christ’s sacrifice. But we too often fail to realize that the grace of God did not stop there, for He then extended that grace in His adoption of us. I suppose one could imagine that it might be possible to be justified but not adopted. This, unfortunately, is the unattainable lot of those who are trying to be justified by their own works. Not only do they fail to reach that level of holiness before God, but they are left with no way to then force their adoption. The Scripture makes it clear that adoption only comes to those who are justified through Christ… and Christ alone:

“For you are all sons of God through faith in Jesus Christ.” (Galatians 3:26)

“But as many received Him [Christ], to them He gave the right to become children of God.” (John 1:12)

“… God sent forth His Son… in order that He might redeem those who were under the Law, that we might receive the adoption as sons.” (Galatians 4:4-5)

“He predestined us to adoption as sons through Jesus Christ to Himself, according to the kind intention of His will.” (Ephesians 1:5)

So if we try to justify ourselves, we not only fall short in that justification, but we are also left without the means of adoption to become God’s child… and He our Father. This is why, for those under Islam, there is nothing beyond the Law… no sense or assurance of any real relationship with God.

So, we contemplate the unfathomable reality that God has made us His children and that He is therefore now our Father. This truth provokes within us our deep desire to now please Him in all we think and say and do. Not because of some “quid pro quo” or obligation to earn something from Him, but simply out of love for Him in response to what He lavished upon us.

“See how great a love the Father has lavished upon us, that we should be called children of God; and such we are.” 1 John 3: 1

There is an extremely radical difference between the obedience of a child to their Father and the obedience of someone seeking to gain acceptance or even salvation by their works. The former is motivated by their deep love for the Father and carried out in the safety of His love for them; the latter is motivated by a fear of ultimate rejection and carried outside of the security of a “family” relationship with God.

If we really believed that God was truly our Father, and we were really and truly His child… would it change our prayer life? Our Christian walk? Our attitudes?

May we, the “children of God”, come to an ever-deeper understanding  and reverence of what it truly means to be given the right to call Him Abba, Father.

See what great love the Father has lavished on us, that we should be called children of God! And that is what we are! 1 John 3:1

God sent forth His Son, born of a woman, born under the Law, so that He might redeem those who were under the Law, that we might receive the adoption as sons. Galatians 4:4-5

He predestined us to adoption as sons through Jesus Christ to Himself, according to the kind intention of His will,  Ephesians 1:5

But to all who did receive him, who believed in his name, he gave the right to become children of God, John 1:12

Jesus said to him, “I am the way, and the truth, and the life. No one comes to the Father except through me. John 14:6

Since therefore, brethren, we have confidence to enter the holy place by the blood of Jesus, by a new and living way which He inaugurated for us through the veil… Hebrews 10:19-20

For you are all sons of God through faith in Christ Jesus.  Galatians 3:26

For you have not come to a mountain that can be touched and to a blazing fire, and to darkness and gloom and whirlwind, and to the blast of a trumpet and the sound of words which sound was such that those who heard begged that no further word be spoken to them. For they could not bear the command, “If even a beast touches the mountain, it will be stoned.” And so terrible was the sight, that Moses said, “I am full of fear and trembling.” But you have come to Mount Zion and to the city of the living God, the heavenly Jerusalem, and to myriads of angels, to the general assembly and church of the firstborn who are enrolled in heaven, and to God, the Judge of all, and to the spirits of the righteous made perfect, and to Jesus, the mediator of a new covenant, and to the sprinkled blood, which speaks better than the blood of Abel.  Hebrews 12:18-24

Grace to you and peace from God our Father and the Lord Jesus Christ, Galatians 1:3

Because you are sons, God has sent forth the Spirit of His Son into our hearts, crying, “Abba! Father!” Galatians 4:6