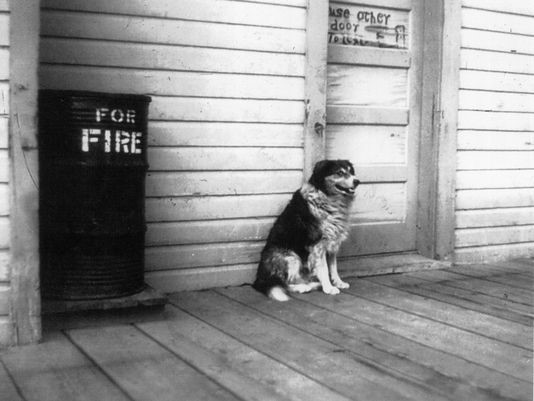 In 1936, a humble shepherd in Montana became ill and was taken to the hospital. His dog, Shep, refused to leave his side and remained at the hospital doors day and night.  When the shepherd died and they put his coffin on a train, Shep was there at the depot, whining terribly as the train and his master departed without him. For the next five years, Shep remained faithfully at the tracks. He met every train, four times a day, running up and down the cars, examining every person who got off, looking for his master.

There are many stories about dogs being faithful to their masters. Maybe this is one reason God made dogs... to teach us.

It has been said that faithfulness is one of the most critical characteristics a human being can possess and yet, in an “all about me” culture, it is one that is unfortunately waning. It is in these times that we turn our attention to the One who is forever Faithful.

Sometimes, when thinking about the nature of God, it is helpful to ponder what it would be like if God did not possess a particular attribute. This is one of those cases. We are quick to confess or even sing songs about the faithfulness of God, but rarely do we spend time meditating upon it or what it would mean if He were not faithful. Were we to sufficiently do so, I suppose it would bring us to our knees in thankfulness and deep gratitude.

The word “faithful” is somewhat unique, for it does not seem to follow the normal suffix pattern: meaning a “fullness” of something. “Joy-ful” means that someone is full of joy…  so, too, “helpful” and “thankful”, “doubtful” and “sinful”, etc. As Christians, we are a “hopeful” people, meaning we are full of, and filled with, “hope”… or we should be.

But to say that God is full of “faith” because He is “faithful” doesn’t sound right. And it shouldn’t because the “faith” in “faithful” has a different meaning than we are normally used to. It is best illustrated in Deuternonomy 32:15, where God declared to Moses that he would not enter the Promised Land because of his actions before the people at the waters of Meribah-kadish.[1] In speaking this, God said that Moses had “broken faith” with the Lord. Here the word “faith” is used to mean a commitment to a covenantal relationship. God had raised up Moses and put him in a special position of leadership. He was a representative, a messenger, an ambassador of God to the people. Moses was therefore in a “faith” relationship with God and he broke that faith when he acted in a way that did not, as God said, “treat Me as Holy in the midst of the sons of Israel”.

If we were honest, we would have to confess that we daily, if not more frequently, “break faith” with God, for we who are new creatures in Christ, sons of the living God, having God as our Father, are now witnesses, ambassadors, representatives of Christ to the world around us. When we, as sons and daughters, act in a way that is contrary to the nature of our Father, we “break faith” with Him. That is why we are in daily need of His forgiveness by the eternal sacrifice that cleanses us from all sin. This is, indeed, amazing grace!

But God is faithful and always will be. To be otherwise would be to deny Himself and this He cannot do:

… if we are faithless, he remains faithful, for he cannot disown himself. 2 Timothy 2:13

Great is His faithfulness.

P.S. Shep remained faithful until the end. After years of greeting each train, fed by the depot staff, Shep grew old and began to lose his sight and his hearing. He was eventually struck by one of the trains and died. There is a statue honoring him at the Benton train station to this day.

To some extent, there is a parallel here. Our humble Shepherd also physically departed our world. May we be just as faithful awaiting Him.

He is the Rock, his works are perfect, and all his ways are just. A faithful God who does no wrong, upright and just is he. Deuteronomy 32:4

In all that has happened to us, you have remained righteous; you have acted faithfully, while we acted wickedly. Nehemiah 9:33

For the word of the Lord is right and true; he is faithful in all he does. Psalm 33:4 Your love, Lord, reaches to the heavens, your faithfulness to the skies. Psalm 36:5

Teach me your way, Lord, that I may rely on your faithfulness; give me an undivided heart, that I may fear your name. Psalm 86:11

But you, Lord, are a compassionate and gracious God, slow to anger, abounding in love and faithfulness. Psalm 86:15

I will sing of the Lord’s great love forever; with my mouth I will make your faithfulness known through all generations. Psalm 89:1

Who is like you, Lord God Almighty? You, Lord, are mighty, and your faithfulness surrounds you. Psalm 89:8

For the Lord is good and his love endures forever; his faithfulness continues through all generations. Psalm 100:5

He is the Maker of heaven and earth, the sea, and everything in them— he remains faithful forever. Psalm 146:6

This is what the Lord says— the Redeemer and Holy One of Israel— to him who was despised and abhorred by the nation, to the servant of rulers: “Kings will see you and stand up, princes will see and bow down, because of the Lord, who is faithful, the Holy One of Israel, who has chosen you.” Isaiah 49:7

Ephraim has surrounded me with lies, Israel with deceit. And Judah is unruly against God, even against the faithful Holy One. Hosea 11:12

“See, the enemy is puffed up; his desires are not upright— but the righteous person will live by his faithfulness— Habakkuk 2:4

But the Lord is faithful, and he will strengthen you and protect you from the evil one. 2 Thessalonians 3:3

… if we are faithless, he remains faithful, for he cannot disown himself. 2 Timothy 2:13

I saw heaven standing open and there before me was a white horse, whose rider is called Faithful and True. Revelation 19:11

[1] If you recall, this where God told Moses to “speak” to the rock and it would bring forth water. Moses got caught up in himself and his anger, saying “shall WE bring water out of this rock again for you!?!” and instead of speaking to the rock, he struck it, as he did earlier in the Desert of Zin (Exodus 17). Moses struck the rock twice, probably because it didn’t work the first time. Paul tells us in 1 Cor 10:4 that the Rock was Christ… a typology that Moses had obviously disrespected by his actions.