A Shooting in the Badlands 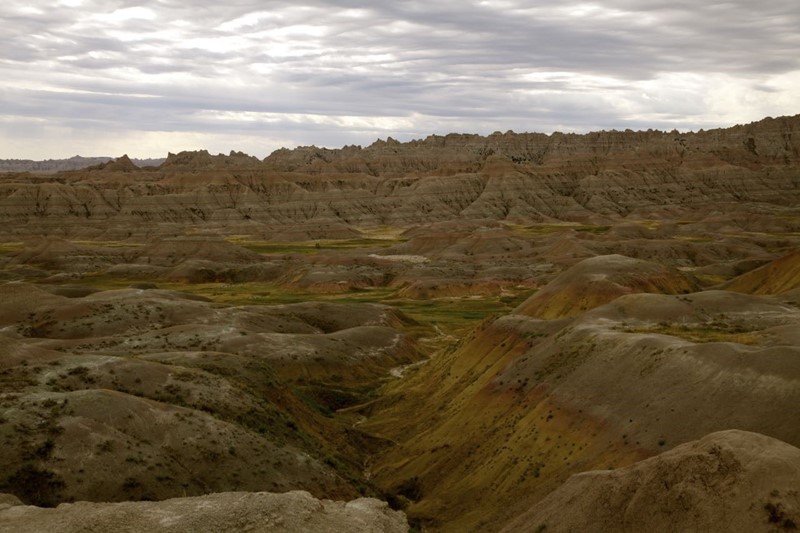 I have to tell you…I was stunned at the beauty here. Pictures don’t do it justice.

We are now about a mile above the “basement rocks” and the “Deadwood Formation” that we were examining earlier. It is amazing to think that there could be that much sedimentary material, but this is actually not as deep as we might find in other places where it can be 17,000 feet thick.

But what amazed me more was what Dr. Ross told me about the scene before us. The upper layers, above the yellow/orange line, are layers that were laid down after the Flood. These are deposits that were part of the numerous smaller catastrophic events that continued to shake a world still “trembling” from the effects of being “destroyed”, as Peter puts it. Not only were the continental plates moving and volcanic eruptions on-going, but large bodies of water became trapped behind natural berms that eventually breached, creating local floods that were catastrophic in their own rights.

So, these upper Badland layers were also deposited rapidly, though post-flood, and then easily eroded as they continue to be today. The tops of the hills here are losing as much as six inches every year to the effects of wind and rain and runoff.

It is easy to look at all of this and think, because we have been told the standard geological story in school and in the national park signage, that it is very, very old…the result of millions of years of slow, gradual processes. But a closer examination raises a lot of problems with that story and, instead, the evidence matches more closely the story that was recorded thousands of years ago in the ancient scrolls.

We are now off to the Grand Canyon for a week of examination and filming. It is one of my favorite places in the entire world!