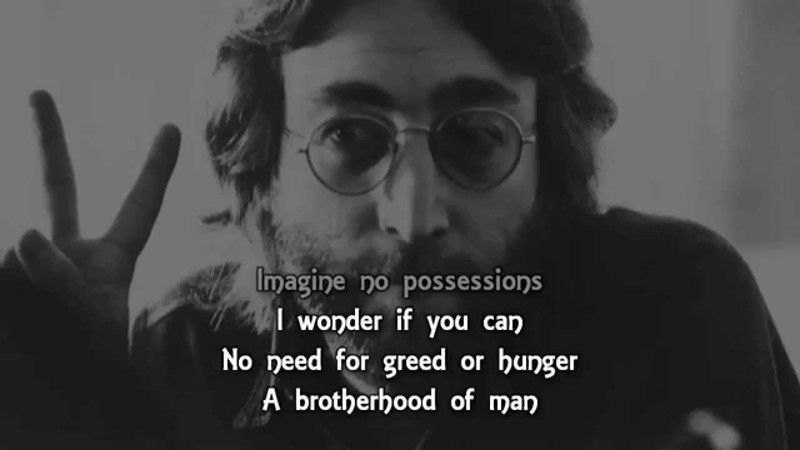 Imagine no possessions, I wonder if you can. No need for greed or hunger, a brotherhood of man. – John Lennon

Today, we have another proposition laid before us. It is just as tempting, because, on the surface, it sounds so good. And, again, all we have to do is turn from God and His ways and follow another path.

Jesus spoke of this as well when He said there were two ways before us, one was small and narrow and the other wide and broad (Matthew 7:13-14). By this, He was telling us that the wide gate and the broad road are certainly tempting… so tempting, in fact, that “many” go that way. Yes, it looks easier and it appears much more pleasant. There is even a hint of paradise at the end. But it is a false path, a deceptive way. It may appear pleasurable, but it leads, as Jesus told us, to destruction.

So, too, the belief that there is a utopia at the end of the socialism path. It is so appealing, so alluring, so “right”, that many in our culture are again falling prey to its promises.

John Lennon was a ‘believer’. He thought this was the paradise we should all pursue:

Imagine there’s no heaven. It’s easy if you try. No hell below us. Above us, only sky. Imagine all the people, living for today.

Imagine there’s no countries. It isn’t hard to do. Nothing to kill or die for, and no religion too. Imagine all the people, living in peace.

Imagine no possessions. I wonder if you can. No need for greed or hunger, a brotherhood of man. Imagine all the people, sharing all the world.

You may say I’m a dreamer, but I’m not the only one. I hope someday you’ll join us, and the world will be as one.

I put the promises in bold:

all people living for today… living in peace… no greed or hunger, a brotherhood of man… sharing all the world… and the world will be as one.

It sounds wonderful, doesn’t it? Peace, no hunger… brotherhood. But, of course, there are the pre-requisites to get there. I underlined those:

no heaven; no Hell; no countries; no religion; no possessions

Lennon gave us simply an excerpt from the list of necessities that Karl Marx and Friedrich Engels laid out as the means to achieve utopia. Lennon didn’t list them all in his short song, but Marx included the destruction of marriage, the family and the church as well. The real cost of Socialism/Marxism/Communism has to be kept somewhat hidden. Lennon knew this for he said as much in his self-description of “Imagine”:

[it is] anti-religious, anti-nationalistic, anti-conventional, anti-capitalistic… but because it’s sugar-coated, it’s accepted.

And the truth under the covers of Socialism must be sugar-coated, for no one would want what really comes to those who take this broad road and the means to get there. It may sound so idealistic to croon about no one having possessions, but living that way, as we have seen it played out in places like East Berlin, is more of a hell on earth than even a hint of paradise. Policing out the belief in God is gruesome. “Stomping out” might be a better phrase. Vladimir Lenin said that the price to get to the socialistic utopia was worth it, even if it cost the lives of millions of people. Which it did. Some estimate 90 million at the Union of the Soviet Socialist Republic’s bloody hands.

In the end, it is nothing but a scam. The promise is whispered that if you join the revolution and take down the owners and then give up your possessions, you will enter into a utopia. What a scam. The East Berliners lived in poverty while the leaders lived in palaces. The same is true in Cuba and Venezuela and throughout socialism’s history.

I would like to begin a series that will look at the promises of this scam and the means and the “way” that is offered to get there and compare those claims to the ones we find in a biblical worldview. We are on the possible precipice of being swept into this by a host of believers in socialism and we best know what is down that broad path.

Here is a comment from “The Socialist Party of Great Britain”. I think it is important for you to read this, for it will help you understand the passion for the utopia they are fighting for and the deception in which it is couched:

"Imagine", the song, was unquestionably Lennon’s finest moment. Its lyrical and conceptual clarity shone sunlight of vision upon our dark and violent world. It urged us to imagine a world without property, without religion, without nations, living in peace. It postulated an economic order in which both greed and hunger would be impossible. Socialists also share this vision. They support the cause that approaches humanity towards the goal of a classless economic order in which wage labor, money and buying and selling have been replaced by free people working together to meet their needs without the constraints imposed by the market system, in short, a world of peace, equality, abundance and ecological sustainability. You may think that we are dreamers, but we are not the only ones. I hope someday you’ll join us. And the world will live as one.

This is the “One-World-Government/Community” of Socialism/Marxism. We will look at that vision and compare it to God’s design.

[ i ] [Above: burning Bibles and the American flag in Portland] The Neo-Marxist left is separating...