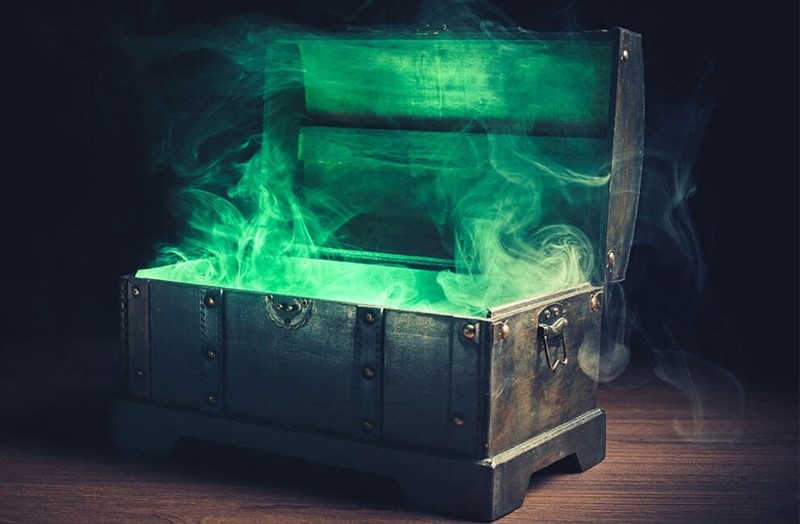 One of the most identifiable elements of Greek mythology is “Pandora’s Box”. The original Greek word is “jar”, but somehow “Pandora’s Jar” doesn’t sound right. We might be more descriptive if we called it Pandora’s Pit. In the briefest of summaries, Pandora opened up what she shouldn’t have and out came evil of all sorts… think opening the Pit of Hell. Some are brought in their thoughts to Eve in the Garden and what came from that rebellion; indeed, it is possible the myth was drawn from Genesis 3.

My thoughts, though, are brought to Karl Marx, for I am increasingly convinced that he unleashed a demonic worldview on the earth in these latter days. It seeks to destroy all of God’s social systems: Family, Church, Labor, Community, God & Man, and even the State. The last might be confusing, for Socialism is most certainly Statism, so how could we say that Marx wanted to destroy the State? Well, he wanted to destroy the State according to God’s design and replace it with a counterfeit. To avoid confusion, we will from here on out refer to this counterfeit as the SState, for Socialistic State.

Indeed, we could say the same for the other institutions that God has instituted. The biblical family is replaced with a counterfeit “family” in which there is no marriage, sex is free from the marriage bond and children are raised by the SState. The biblical form of Labor is replaced with the SState owning the “means of production” and as Bernie Sanders stated, no one has to work if they don’t want to. This, of course, would never work out, but it sounds pleasing to the naïve ear. The biblical form of Community is replaced with SSocial SServices. God & Man and Church are replaced with a worship of the SState. Blasphemy is speaking or acting or thinking contrary to the SState’s new ethical proclamations and foundations. If you are familiar with it, this is Nineteen Eighty Four’s “CrimeSpeak” and “CrimeThought”. We can see this in the rise of our own “CrimeSpeak” if one dares to have an opinion contrary to the new “Wokeness”.

Marx, I believe, was under the influence of evil spiritual forces. I have forced myself to study his biographies and read his writings and poetry, which were all quite “dark”. In one, assuming Marx is the character in the poem, “My soul, once true to God, is chosen for Hell.” In another, “Heaven I’ve forfeited, I know if full well.” Read his poems at your own risk.

Marx was a tortured man. He hated God; was never really employed; often drunk. He and his family sponged off of anyone they could. When his father died, he didn’t attend the funeral, but his next communication to his mother was for part of the estate. When Engels “wife” (common law) died, he didn’t attend the funeral, but wrote Engels a letter implying that he should now have more funds to give to Marx. That incident nearly broke their relationship, but Engels continued to support him. Marx’s son died very young, many believing it was because he was without sufficient sustenance. It grieved Marx, yet he still sought no employment and continued buying drink. He was given to fits of anger and behavior that caused some to wonder if he were possessed or under demonic influence. Richard Wurmbrand (Persecuted for Christ) felt so. Wumbrand had suffered so much under Marx’s worldview and had seen so many others suffer as well, that he underwent a thorough study of Marx’s worldview and his life and writings. He believed Marx was driven by evil forces. Robert Payne, in his classical biography of Marx, had the same thoughts. Paul Kengor (The Devil and Karl Marx) is convinced of it and writes of Marx’s fascination with the Devil and his power and domain. As the Saint Benedict Press writes:

No other theory in all of history has led to the deaths of so many innocents. How could the Father of Lies not be involved?... [Marxism is an] evil that should have never been let out of its pit.

This is the worldview that slaughtered over 100 million people in the 20th Century.

This is the worldview that now holds tyrannical power over people in North Korea, Venezuela, Cuba, China, and more.

This is the worldview that is having a resurgence in the U.S. It has been taught at our major universities for years and finds itself becoming more and more popular, especially with the younger population:

Yet, despite the naïve appeal to many, Socialism is a scam, as we wrote earlier. It promises the starry-eyed a false utopia and the greedy spoils of civil war, but they get neither. They end up, instead, in a demonic system where incentives to produce are destroyed and the fruitfulness of the people, what is left of it, confiscated by the SState led by tyrants in palaces.

Marx saw Socialism as the means to reach Utopia, which they called Communism. We have countries that are called “communist”, but from Marx’s perspective they are all still in their socialistic stage—a tyrannical stage, of course, for that is where all Socialism movements end up. The SState seeks to control everything and will never give up that power.

It is a dead end—a demonic end—brought to the earth from the pit of Hell.

Marx died in 1883, but as Breese wrote (Seven Men Who Rule the World from the Grave), Marx ruled on. Pandor...