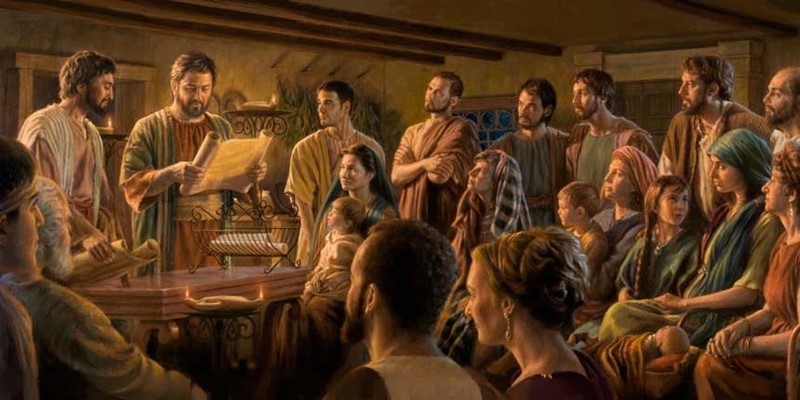 Paul is expressing a creed that appears fully developed and solidified, very early in the history of Christianity.

Well, first of all, what is a creed? The word comes from the Latin, credo, which means “I believe”. This is how we find it in Webster’s 1828 dictionary:

Throughout the history of Christianity, we find that creeds arose, in many cases, if not all, to counter an attack upon the fundamentals of the faith. The Apostle’s Creed is familiar to many and it most likely arose to counter the heresy of Marcion; the Creed of Nicaea—Arian; the Nicene Creed—Apollinarianism; Chalcedonian Creed—Nestorian; etc. I know some Christians who think that there is something evil about creeds, but they have been important to the body of Christ to not only clarify our beliefs but as a means of unity.

So, too, the earliest of Christian creeds—which we are dealing with here in 1 Corinthians. From its deep emphasis upon the resurrection of Christ, one can assume that it was in response to that challenge. And, it wouldn’t be hard to imagine, given the environment of the very early church, that the creed was an important, concise declaration of the facts concerning the death, burial and resurrection of Jesus in the face of persecution. It emboldened them and it unified them.

Some might wonder why this is called a creed. Isn’t it just a few verses of Paul’s writing? What makes it so different that we would bracket it as a creed[1]?

First of all, because Paul pretty much tells us so. He introduces it with words that are well-known rabbinical terms that would preface a creed or tradition.

It would be like someone saying “Please stand and raise your right hand and repeat after me…” You immediately know that an oath is about to be quoted: “I swear to tell the whole truth…”

So, too, Paul’s words: “delivered to you… what I received” are the introductory words to the beginning of a creed, which he then follows immediately with a list, also typical of a creed:

The form and style of the text, and even the words, are typical of a creed and they are non-typical of Paul, which further solidifies that Paul is quoting a well-known creedal declaration.

And, if Paul is saying that he had delivered this to the Corinthians earlier (which reinforces the notion of a repeatable creed), then that would have been somewhere around 51AD, only 20 years after the resurrection. But, note that if he were delivering it, then it had to be earlier than that, for this had been passed on to him. This might have been in 37AD when he went to Jerusalem after his conversion. Which means the creed had already, within a few years of the resurrection, been a part of the early believers worship. Some scholars think that it could have been formed within a few months after Jesus rose from the dead. Why might we think this? Because of the polemic. There were lies being spread that Jesus didn’t rise from the dead, but instead His body had been stolen by the disciples. It is this challenge that gives rise to a creed. It must have been very tough, in those days, to be a new believer in the risen Lord, when the Jewish authorities were no doubt doing everything they could to stamp it out.

So, why is this important? Because this and the resurrection polemic both stand starkly against the charge that the death, burial and resurrection of Jesus did not happen, but rather was a myth and legend that developed through the imaginations of men. But the early dates of both preclude this, because there isn’t enough time for a legend to develop. Myth and legends arise only after several generations have passed, when there are no longer any witnesses that can correct the false narrative.

However… there is something more for us here.

Try to contemplate, if you will, the connection that you and I have all the way back to those very first believers… to Peter and James and Paul; to the jailer and the centurion, Cornelius; to Mary and Magdalene; to the 3000 souls that were added to the faith after Peter’s sermon at Pentecost. They were stating this creed as a statement of what they believed, that Jesus died for our sins, that he was buried and rose again, that He appeared to many. They were confirming, and we confirm with them, that Jesus conquered the grave. He is alive!

This is our heritage. Stand strong in the Lord.

[1] I suppose no one has addressed this better than Gary Habermas. If you want to go deeper, I recommend you read any of his books on the resurrection.