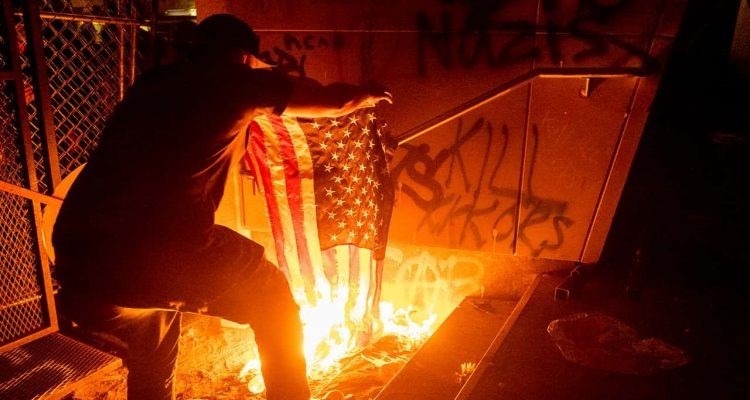 [Above: burning Bibles and the American flag in Portland]

The Neo-Marxist left is separating the institutions of American democracy from their national foundations. If they succeed, the U.S. will over time lose its republican culture and morph into a state in which the new aristocracy wields power over a disenfranchised and impoverished populace. -Andrew A. Michta

This quote comes from Andrew A. Michta’s article in the Wall Street Journal on October 26, 2020. He is the dean of the College of International and Security Studies at the George C. Marshall European Center for Security Studies in Garmisch-Partenkirchen, Germany. I highly respect him and his writings. Here are some excerpts from his WSJ article where he is assessing the current state of America:

‘Death to America!” is a common refrain from Antifa rioters from Portland, Ore., to Kenosha, Wis… These acts of violence encapsulate five decades of neo-Marxist indoctrination in American schools, colleges and universities. The left’s “long march” through the institutions is all but complete… they have been indoctrinated to reduce American life to a racial binary of whites vs. “people of color.” It’s much like the communist binary of the bourgeoisie vs. the proletariat that the Bolsheviks used to seize power in 1917, with millions perishing in the totalitarian Soviet experiment that followed. The violence suggests that tribalism based on group identity is poised to succeed the larger national community that for more than two centuries has protected and expanded freedom around the world.

This, of course, is exactly what we have been exploring in our woefully short view of socialism in America. It seeks to create subclasses and incite them to hatred and revolution against a manufactured evil hegemony. More from Michta:

The traditional view that political victory and loss are both part of the democratic process and the gist of a self-constituting polity has been replaced with a Leninist drive to nullify one’s opponent. The principle of the radical politics now consuming the country seems to be “I win, you disappear.”

Do not be fooled as those who have been caught up in what they believe is the compassion of socialism. It is not. In the same way the “compassion” of welfare has destroyed the black family in America, so too, the “compassion” of Marxism is nothing but a scam to consolidate emmense power in the hands of a tyrannical few that will ultimately destroy the fruitfulness and the life of this nation and its people. Marxism/Socialism does not seek the good of anyone or anything but the power of the elite. This is how Machti concludes:

The assault on the constitutional right of citizens to speak freely unless they affirm first the increasingly intolerant orthodoxy has been unrelenting. The nation’s freedom is being abridged by incessant charges of structural racism, white privilege, homophobia and intolerance, with few pausing to consider the effect on liberal traditions. Today the neo-Marxists control almost all areas of elite discourse in the U.S., and can thus cancel any opposition by hurling “populism” or “racism” at anyone who refuses to submit to their ideological line.

As cities burn and racialists push to resegregate public spaces, the deconstruction of the American nation is coming dangerously close to completion. The Western nation-state as the irreducible unit of the international system is weaker than at any time since the end of World War II. The neo-Marxist left is separating the institutions of American democracy from their national foundations. If they succeed, the U.S. will over time lose its republican culture and morph into a state in which the new aristocracy wields power over a disenfranchised and impoverished populace. The stakes are in full view for anyone to see.

Andrew Michta is not an alarmist, but a realist. His expertise is to assess cultures, nations, people groups and their trends and futures, which he was doing in his article. I, unfortunately, sense he is accurately assessing what is happening in America as he did in the post-Soviet European nations many years ago.

Ideas and worldviews have consequences. We have been pumping the Marxist/Socialist worldview into the heads of our university students and the hearts of our populace through virtually all our means of communication for nearly 70 years, from the lectern to the earbud, from Columbia University to Hollywood, from the newscast to the NBA basketball court. Michta has a deep understanding of Marxism and Socialism and it is his job to understand the trends and movements within nations and people groups. He has issued a serious warning to us from Germany. His article was titled: “The American Experiment Is on Life Support: Neo-Marxists on the street and in institutions want to erase their opponents and deconstruct the country”.

May the people of God have courage and wisdom to stand in our new age and be His Ambassadors to those taken captive by the enemy to do his will.

Surging Crime and a Look At Its Causes

“Crime is first a moral issue. Failure to address it on that level ensures it will only get worse.&rd...