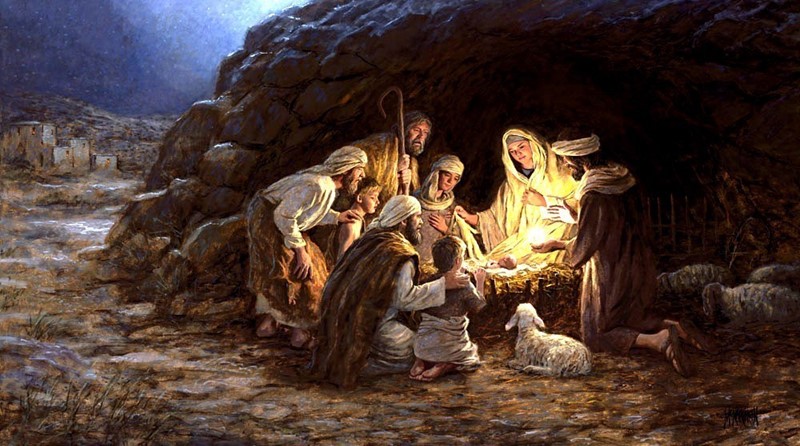 But when the fullness of time had come, God sent forth his Son, born of woman… Galatians 4:4

It was the “fullness of time”. It was as if all of the promises and prophecies, like alarm clocks, were set to go off at this moment. It was as if all the stars and heavenly host had been created and put into motion to come into perfect alignment at this perfect time. It was as if all the earthly kings and kingdoms, all peoples and cultures, all the events of human history, like a symphony, had been playing together in order to reach, now, this great crescendo.

It was the fullness of time. The promised Seed had come.

We must go back to the garden of Eden at the scene of the Great Crime (Genesis 3). Adam and Eve and Satan, the conspirators, were assembled before their Creator. They had rebelled against God. The universe was now tipped toward death and decay. Eden was lost and evil seeded in the hearts of man. The inexorable pull of sin and death was on everyone and everything.

One would expect God to have taken in a deep breath and let out a roar of annihilation… evaporating everything. And like an artist with a ruined sketch, wad it all up and throw it into the furnace so as to start fresh with a new canvas. But instead, unbelievably, God took in a deep breath and, instead of letting out a roar of annihilation, He breathed out a Promise—the Promise of a coming Seed that would eventually make all things right again. It was a strange Promise, for it was to be the Seed of the woman, though it is the male that carries the seed.

And true to His Word, in the fullness of time, God sent forth that Promised Seed, born of a virgin woman.

Some have offered the perspective that the Roman empire, bringing not only its rule and roads, but its ubiquitous language, so precise in its elements, was the perfect ground for the new covenantal Scriptures. This was the fourth kingdom in Nebuchadnezzar’s dream (Daniel 2) in which the stone, the kingdom of God, was going to be set up, eclipsing all power, and fill the earth. It was this Roman Empire that brought into history the methods of scourging and crucifixion and would unwittingly fulfill the prophecies of Isaiah. It would be this empire that would unwittingly fulfill Jesus’ prophecies and destroy the temple. Assembled here was Herod, who would fulfill the prophet Jeremiah’s words of Rachel weeping for her children, as the enemy through him attempted to wipe out the Seed. Assembled here also were the Pharisees, the Sadducees and the forerunner, John the Baptist.

It was the fullness of time.

And so, after 400 years of silence, no word from the Lord, like the pause in Handel’s Messiah, all heaven then broke loose. Visions, dreams and angelic visitations are abundant. The stars align and the heavenly host is unable to keep silent, bursting forth in praise before the lowly shepherds in the field, watching dutifully over their flocks. This was the moment all creation had been waiting for since the beginning. This was the fullness of time.

May you and your families be filled with the depth of awe and wonder that this event demands.

O holy night! The stars are brightly shining! It is the night of our dear Savior’s birth!

[Previous] [Christmas: Offensive to the gods]