Gazing on the Face of God: Just 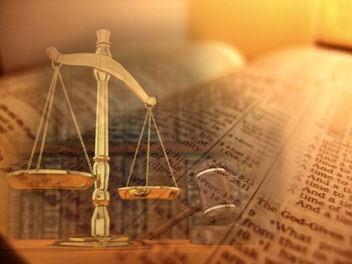 [Preface: Gazing on the Face of God]

But you denied the Holy One and the Just, and asked for a murderer to be granted to you… Acts 3:14

Previously, we contemplated that God is Judge. Because He is both Creator and Holy, He has the right and responsibility to His own nature to judge rebellious acts that are contrary to His divine character and purposes. When He acts in this capacity, He is being “Just” and He is bringing about “Justice”. We will capitalize those letters, because we often want “justice” for selfish reasons. When this happens, it isn’t truly “Just”. When God Judges, it is always Just. When man judges or demands justice, it may not be.

But man is not the measure of what is right or wrong, for he can quickly pervert both for his own selfish ends:

All of these are indicators and symptoms of straying deeply from a biblical worldview.

As I write this, our culture is in turmoil over the issue of justice. People are angry over it; they are marching because of it; property is being destroyed in the name of “justice”, or rather, “injustice”. In this case, a human being’s life was taken away by a police officer whose actions were detestable. A call for justice is more than warranted. And if there is systemic “injustice” in our institutions, then they need reforms.

The followers of Christ must always seek true Justice.

But whose standards are used to determine what is “just” and what is “unjust”? From a biblical worldview perspective, those standards must always be divine, not mine. The Standard is He, not me.

Our opening verse is one that charges injustice. Peter is taking his fellow Jews to task for they judged an innocent Man and sentenced Him to death. And when offered a chance to set Him free, they instead asked for a murderer to be released. I suppose we could call what occurred in Jerusalem 2000 years ago the epitome of injustice.

The Scripture almost always binds together the notion of righteousness with justice. In fact, in our opening verse, “… you denied the Holy One and the Just…” had to be taken from the King James translation in order to get the word “Just” because most of the literal translations, like the ESV and the NASB, translate the Greek word dikaios as “righteous”. Hence the ESV, “… you denied the Holy and Righteous One…”. Similarly, Isaiah 45:21 is translated in the King James as “a Just God and a Savior” whereas the NASB renders it “a Righteous God and a Savior”. There is a close link, as there should be, between “righteousness” and what is “Just”.

Additionally, when we see the words Justice in the Old Testament, they are often used side-by-side with “Judgment” as in Psalm 89:14. Note the King James and the ESV translations:

Justice and judgment are the habitation of thy throne: mercy and truth shall go before thy face. KJV

Righteousness and justice are the foundation of your throne; steadfast love and faithfulness go before you. ESV

So, not surprising, we have a close tie between the notions of “just”, “justice”, “righteousness” and “judgment”. And “righteousness” belongs to the Lord as we read in Daniel’s prayer:

To you, O Lord, belongs righteousness, but to us open shame, as at this day, to the men of Judah, to the inhabitants of Jerusalem, and to all Israel, those who are near and those who are far away, in all the lands to which you have driven them, because of the treachery that they have committed against you. Daniel 9:7 (ESV)

This is Daniel’s prayer of lament and confession before God on behalf of the people of Israel. They had been judged and sent into exile because of their “treachery” against the Lord. Here is the key to understanding true Justice. When someone is rebellious against the Lord and His purposes, then he has rebelled and acted treacherously against the holy and righteous God. When God therefore judges those treacherous acts, He has acted Justly and brought about true Justice.

This is extremely important to understand for it is very easy to cry “justice” based on one’s personal will and desires rather than God’s will and standards.

If I covet the rich man’s land or goods, I might cry “justice” because he has more than I do, and demand, through high-sounding words like “social justice”, that I be given a share of his wealth. Or, I might desire “justice” when a true wrong has been committed, but because of prejudice or hatred or vengeance, my definition of “justice” morphs into exacting revenge upon a whole group of people or upon those who are innocent and had nothing to do with that injustice.

Often times, the emotions from injustice can stir up a mob and the mob stirs up anger and hatred, and when a mob becomes angry and filled with hate, ugly things begin to happen. That is why the Scripture warns us against this, for justice often becomes perverted:

The world, the flesh and the enemy always want to pervert that which is Holy with counterfeits. That is why Jesus called Satan the “father of lies” and the Scripture calls him a “masquerader”:

And no wonder, for Satan himself masquerades as an angel of light. It is not surprising, then, if his servants also masquerade as servants of righteousness. Their end will be what their actions deserve. 2 Corinthians 11:14-15

Karl Marx had a field day taking the notion of “justice” and twisting it into something that masqueraded as righteousness. Many, many have fallen prey to this in our very day. Marx took the notion of justice that was supposed to be founded upon the righteousness of God and used it as a tool by which socialism and communism could extract the goods and power from the people. His famous words (not original with him) were:

This became the slogan for selling the masses on the hope that the “system” would take from those who had more than they had and distribute that wealth to them. Marx was convinced that socialism would result in a massive abundance of goods produced in the communist system such that everyone’s needs would be satisfied.

The reality, as history shows, is the opposite. For the consolidation of power always results in the slow, but sure, emaciation of the fruit of the people.

I. Nothing in society will belong to anyone, either as a personal possession or as capital goods, except the things for which the person has immediate use, for either his needs, his pleasures, or his daily work.
II. Every citizen will be a public man, sustained by, supported by, and occupied at the public expense.
III. Every citizen will make his particular contribution to the activities of the community according to his capacity, his talent and his age; it is on this basis that his duties will be determined, in conformity with the distributive laws.

This “masquerade”, duping the people based upon their selfish desires, never ends well. Power is wrenched from the masses and consolidated at the top and the people become wards of the state, in every possible way. Vladimir Voinovich satirized what the communist city really delivered:

Every morning the radio announced: “Comrades, your needs for today are as follows: ”

However, the masquerade continues for this is not far from the “social justice” and calls for “socialism” that are popular in our culture today. However,  they are wrongly labelled as “justice” and more properly labelled as “levelling”. Some might more accurately label them as “theft” because the whole system is based upon the theft of the people’s goods.

This is far from “Justice”. And in the end, the divine nature and principle of God has again been twisted by the selfishness of man into something demonic.

But, the child of God is not to be taken by such things, nor is he to be pulled into despair and a loss of hope. For it is the Just God and the understanding that His Justice will eventually rule, that gives us hope.

It is also bound up in the knowing that we, who have also been guilty of treachery against God, have seen His Justice meted out against the Righteous and Just One on our behalf. And it is this overwhelming grace of God that should move us, when we are the target of the injustices of this world, to turn and forgive those who are unjust. We labor against injustice, yes. But we are ready to forgive.

In the midst of the greatest injustice ever done in the history of man, there was forgiveness:

Father, forgive them; for they do not know what they are doing. Luke 23:34

For I have chosen him, that he may command his children and his household after him to keep the way of the Lord by doing righteousness and justice, so that the Lord may bring to Abraham what he has promised him.” Genesis 18:19

You shall appoint judges and officers in all your towns that the Lord your God is giving you, according to your tribes, and they shall judge the people with righteous judgment. Deuteronomy 16:18

You shall not pervert justice. You shall not show partiality, and you shall not accept a bribe, for a bribe blinds the eyes of the wise and subverts the cause of the righteous. Deuteronomy 16:19

Cursed be anyone who perverts the justice due to the sojourner, the fatherless, and the widow. Deuteronomy 27:19

The Rock, his work is perfect, for all his ways are justice. A God of faithfulness and without iniquity, just and upright is he. Deuteronomy 32:4

Yet his sons did not walk in his ways but turned aside after gain. They took bribes and perverted justice. 1 Samuel 8:3

The Spirit of the Lord speaks by me; his word is on my tongue. The God of Israel has spoken; the Rock of Israel has said to me: When one rules justly over men, ruling in the fear of God, he dawns on them like the morning light, like the sun shining forth on a cloudless morning, like rain[b] that makes grass to sprout from the earth. 2 Samuel 23:2-4

Blessed be the Lord your God, who has delighted in you and set you on the throne of Israel! Because the Lord loved Israel forever, he has made you king, that you may execute justice and righteousness. 1 Kings 10:9

But the Lord sits enthroned forever; he has established his throne for justice, Psalm 9:7

The mouth of the righteous utters wisdom, and his tongue speaks justice. Psalm 37:30

In one of my favorite texts, Isaiah cries out in anguish, “Woe is me, I am undone! For I am a man of ...