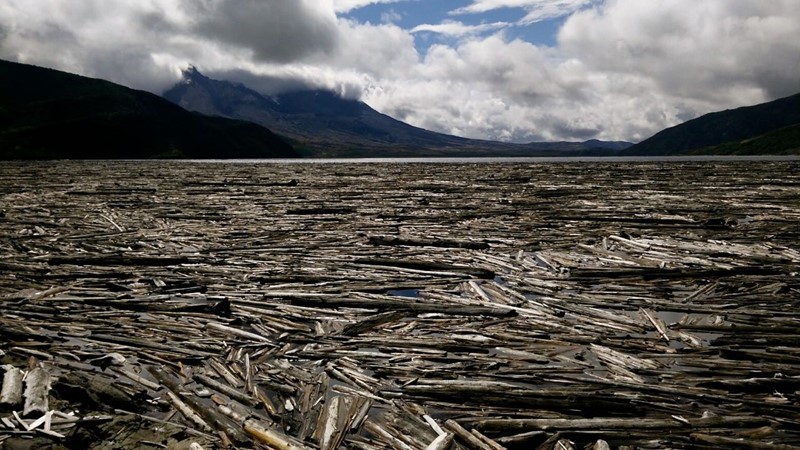 This is a picture of Spirit Lake. It may not look like a lake, but it is. What you see in most of the foreground is a huge log mass that has been floating for over 35 years. But there are several things that you don’t see. One is that before the 1980 eruption Spirit Lake was 800 feet lower. Another is the scoured condition of the mountain slopes around the lake and, most importantly, what is now on the bottom.

Here is what happened:

When the earthquake dislodged the 3.3 billion tons of debris on the north side of Mt. St. Helens, one fourth of that debris avalanche, travelling at over 150 mph, poured into Spirit Lake. This displaced the entire volume of water and “splashed” it (like no other splash you can imagine) up onto the opposite mountainside. Water is a powerful agent, as we mentioned yesterday in how it carved out 600 feet of bedrock like soft butter to form Step Canyon. The lake water did the same to the mountain. It “scoured” it of everything; carving gullies and literally wiping the surface clean, including all of the trees. The water and the material and the trees all flowed back onto its new bed of avalanche debris, creating a new, larger lake on a much higher bottom. When a pilot flew over the area after the eruption, he reported, “Spirit Lake is gone”. He was wrong, but that is understandable because all he saw was a solid mass of downed trees…though they were actually floating and covering the entire surface of the lake.

But the most interesting part of all of this is what happened in the short years that followed.

As the trees floated, the wind and the waves caused them rub against each other, scraping off the bark. As the trees continued to roll and churn, this “milling” process produced a huge mass of floating bark and other material that eventually became waterlogged and sank, creating what is now a three-foot layer of “peat” on the bottom of the lake.

Dr. Steve Austin, who is an expert in coal formation, has dived to the bottom of Spirit Lake to examine this layer. He has found that the composition and texture of material is exactly what one would find in a coal bed. The only thing missing at this point is another mudflow to bury it. Once buried, the water would be pressed out of the peat and the heat of compression would complete the process of coal formation. And since we have now successfully created coal in the laboratory, we know that it can form quickly.

So, the recent eruptions at Mt. St. Helens have shown us that catastrophic events can create complex geological features, rapid deposition of sedimentary layers and rapid and deep erosion. It has also shown us a process by which the peat layers for coal beds can form much more quickly than the standard story has presented to us.

All of this is why Dr. Austin says that the events here have provided us with a Rosetta Stone for understanding the similar geological formations and features that we see all over the world.

The key to the past isn’t the present. The past is better explained by catastrophe…especially a huge one recorded for us in the ancient document of Genesis when all the fountains of the deep burst forth and the earth was destroyed in a catastrophic event beyond imagination.